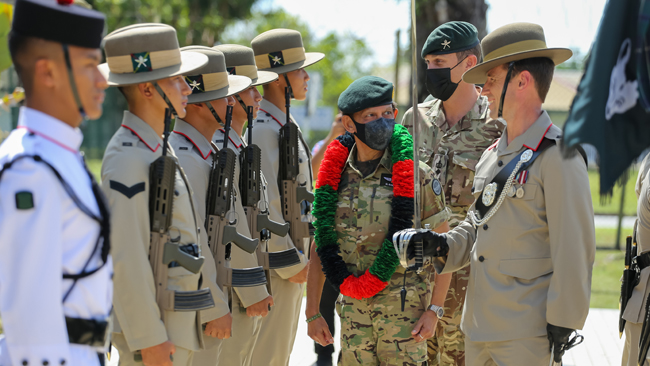 His Majesty Sultan Haji Hassanal Bolkiah Mu’izzaddin Waddaulah ibni Al-Marhum Sultan Haji Omar ‘Ali Saifuddien Sa’adul Khairi Waddien, Sultan and Yang Di-Pertuan of Brunei Darussalam bid farewell to 650 soldiers and family members from the 2nd Battalion, Royal Gurkha Rifles (2RGR) at their base in Seria, Belait District on Tuesday. His Majesty began the visit by arriving in Medicina Lines on board a helicopter and was greeted by Commander of the British Forces Brunei (BFB) Lieutenant Colonel Andrew Todd.

The monarch then made his way to the Tuker Lines, the headquarters of BFB, where His Majesty was welcomed by honour guards before signing a guest book and getting an update on BFB’s operations.