His Majesty delivered his titah at the 12th ASEAN-UN Summit held at the Sokha Phnom Penh Hotel, Cambodia.

His Majesty acknowledged that the COVID-19 pandemic has slowed the progress and hindered efforts to realise the Sustainable Development Goals (SDG). To this end, the 2nd SDG Summit in 2023, which is timely to review our approach to implement the 2030 Agenda, is welcomed. Therefore, His Majesty encouraged ASEAN and the UN to work more closely and continue to promote complementarities between the ASEAN Community Vision 2025 and the 2030 Agenda.

His Majesty then looked forward to working with the relevant UN agencies through the ASEAN Centre for Climate Change in Brunei Darussalam to strengthen ASEAN’s capacity to mitigate the impacts of climate change.

His Majesty also commended the UN Secretary-General for the “Common Agenda” in promoting a more secure and prosperous future. Due to global uncertainties and rising geopolitical tensions, ASEAN and the UN need to remain focussed towards achieving common goals. His Majesty wished the UN Secretary-General much success in the preparations for the Summit of the Future 2024 to reaffirm commitment to the UN Charter and uphold multilateralism. 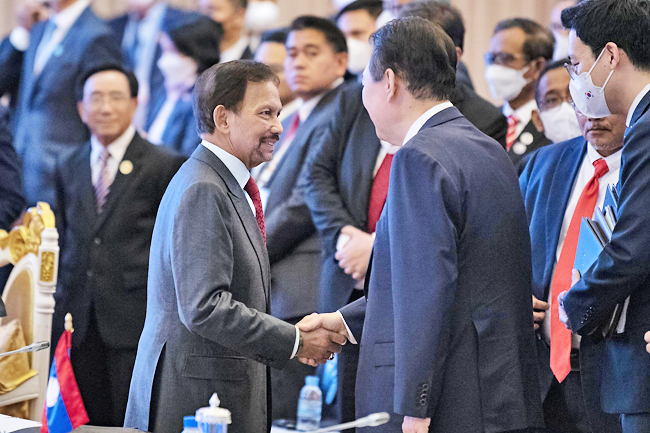 Meanwhile, the UN Secretary-General, in his statement highlighted that ASEAN as a region plays a vital role in dealing with the growing risks of a divided global economy and other challenges ahead, through multilateral solutions.

Prime Minister of Cambodia Samdech Akka Moha Sena Padei Techo Hun Sen then delivered the ASEAN Common Statement on ASEAN-UN Dialogue Relations, which acknowledged ASEAN-UN cooperation in support of regional efforts against the COVID-19 pandemic. In light of uncertainty and global challenges, ASEAN and the UN must work more closely together through constructive engagements to uphold multilateralism.

At the summit, leaders called for stronger collaboration between ASEAN and the UN to ensure an open, rules-based international order to maintain peace and prosperity of the region, as well as support from the UN in dealing with food, energy and security crises.

His Majesty earlier attended the 25th ASEAN-China Summit; and 23rd ASEAN-Republic of Korea Summit, which were held at the Sokha Phnom Penh Hotel, Cambodia.

At the 25th ASEAN-China Summit, His Majesty in his titah highlighted that China has been an important partner to ASEAN that contributes significantly to regional peace, economic growth and social progress, for over three decades. Extensive economic cooperation is one of the pillars of the ASEAN-China Comprehensive Strategic Partnership. To this end, His Majesty welcomed the negotiations to upgrade the ASEAN-China Free Trade Agreement to ensure it is up-to-date, more business-friendly, and resilient to global challenges.

Touching on the Technical Cooperation Agreement, His Majesty looked forward to the early implementation of the Agreement that would strengthen human and technical capacities, in which the Agreement is very much in line with the Global Development Initiative announced by Chinese President Xi Jinping at the UN General Assembly in 2021 to ensure long-term prosperity.

At the end of the titah, His Majesty reaffirmed Brunei Darussalam’s commitment to strengthen efforts and goodwill for the full and effective implementation of the Declaration on the Conduct of Parties in the South China Sea (DOC) as this year marks its 20th anniversary, as well as encouraged respective officials to expedite negotiations towards the conclusion of a comprehensive and substantive Code of Conduct to ensure continued trust and confidence in the region.

Meanwhile, Premier of the State Council of China Li Keqiang in his statement highlighted the notable achievement of ASEAN-China Dialogue Relations in becoming each other’s largest trading partners, given the impacts of COVID-19 and complex international landscapes.

The Prime Minister of Cambodia as ASEAN Chair then delivered the ASEAN Common Statement on ASEAN-China Dialogue Relations which, among other things, commended the implementation of ASEAN-China Comprehensive Strategic Partnership Plan of Action for Peace and Prosperity 2021 – 2025 as well appreciated China’s contributions to the ASEAN COVID-19 Response Fund.

At the Summit, leaders discussed on enhancing trade liberalisation towards regional economic stability and welcomed cooperation between ASEAN and China in the fields of digital transformation and green growth.

After the 25th ASEAN-China Summit, His Majesty then attended the 23rd ASEAN-Republic of Korea (ROK) Summit along with other ASEAN heads of state and government.

At the summit, His Majesty in his titah, among other things highlighted that the Republic of Korea is an invaluable strategic partner to ASEAN that has contributed to the region’s growth, development and prosperity.

His Majesty emphasised that the Republic of Korea’s leadership in innovation can support the people of ASEAN to take full advantage of the Industrial Revolution 4.0, such as utilising technological developments in e-commerce that can benefit micro, small and medium enterprises (MSMEs) in ensuring their continued growth and competitiveness.

His Majesty further expressed his view that all parties need to work together in addressing the impacts of climate change and therefore, His Majesty welcomed the Republic of Korea to collaborate on developing policies to tackle the challenges through the ASEAN Centre for Climate Change which will be hosted in Brunei Darussalam.

In concluding the titah, His Majesty also underscored the importance of sub-regional work, in which His Majesty highlighted that the BIMP-EAGA remains a significant growth area with huge development, investment and industrialisation potential. Therefore, His Majesty expressed his appreciation for the Republic of Korea’s contribution to the BIMP-EAGA-ROK Cooperation Fund which will further socio-economic progress.

Prime Minister of Vietnam Pham Minh Chinh as Country Coordinator for ASEAN-ROK Dialogue Relations, then delivered the ASEAN Common Statement, which underlined further deepening of cooperation between ASEAN and the Republic of Korea through the promotion of comprehensive cooperation and strengthened partnership for peace, stability and security in the region.

At the summit, leaders discussed on accelerating action to address climate change, efforts towards improving digital architecture as well as deepening cooperation with the Republic of Korea in smart cities and green economy.