Despite their success, graduates at Institute of Brunei Technical Education’s (IBTE) 30th Convocation Ceremony said it was not only based on the efforts and sacrifices made, but also the prayers and support of their parents and family members that helped in their achievements and blessings.

At the event, the Bulletin spoke to a few graduates on their experiences.

According to HNTec in Electronic Engineering graduate Hamzi bin Haji Tahir, his time in IBTE brought him plenty of new knowledge while also giving him some challenges.

He chose the programme as it relates to his profession as a Weapon Engineer at the Royal Brunei Navy (RBN), and it helped broaden his knowledge and experience through attachments at the Weapon Workshop (TEMD), Electrical Workshop (MMS) and Maritime Technical School (MTS) at RBN.

With support from his family, module instructor, group leader, course mates and MTS staff, Hamzi said he was always motivated. 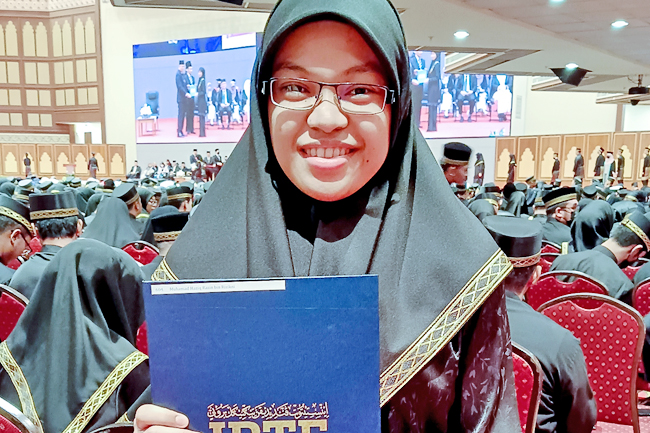 While thinking about how the course could benefit herself, Dayangku Siti Nur Wardina said the knowledge became its own reward. All it took was one strong goal and the choice was made.

She added that her whole semester was a rollercoaster of an experience, from classes and assignments to practical field work.

“It was so much fun, especially with the group of friends I was blessed with,” said Dayangku Siti Nur Wardina.

Recounting her time in IBTE, she said her toughest battle through it all was to distance herself from certain peer groups to allow her to stay balanced and focussed on her priorities which may not be shared by others.

Dayangku Siti Nur Wardina said her biggest motivators were the people she was around every day, to whom she is always grateful for as they taught her so much.

She believes that training oneself to develop new habits will allow a person to grow and try things outside their comfort zone to see where it leads.

“Diving into paths, getting to know the earth a little more and how it can benefit you in various ways – agriculture is so much more than little seeds.”

Hajah Fairuz Jamalina binti Haji Abdul Malek of HNTec in Automobile Technology said her keen interest and curiosity in automobiles meant she had always wanted to learn how they are made, how every part functions, how they are maintained and how repairs are made.

“Cars cause a lot of problems as they get older. Regular servicing is needed, as well as maintenance and repair – all these cost a lot of money. This is what drove my interest,” she added.

She took the course to learn to solve different vehicular problems, so she can eventually reduce the amount of money spent on vehicles.

“I found that assembling and disassembling car parts was interesting. It is like a puzzle where you think, create and solve. This also improved my way of tackling different problems in life.”

Hajah Fairuz Jamalina said that she had a hard time keeping up with all the modules at first, but eventually found her way as her interest and passion in the course grew, especially during practical sessions.

“Theories are nothing without practicals when it comes to developing skills. With the help from my lecturers and friends, the discussions, sharing and exchanging of knowledge and presentations helped create the learning process more fun, even though the urge to give up came at times of struggle.”

She said that the three months of industrial attachment she experienced also honed and expanded her skills and knowledge.

“The feeling of really wanting to make my parents proud of me was the main reason for me to keep going. My sister, my friends who I struggled and grew along with as well as my lecturers gave me constant encouragement,” said the graduate.

“Two years seems like a long period but it flew by in a blink of an eye. It was a rollercoaster ride that started slow and full of doubts but I am glad I closed this chapter with a great ending.”