The contest, organised by the Embassy of China in Brunei Darussalam, saw 24 students from Chinese schools take part. 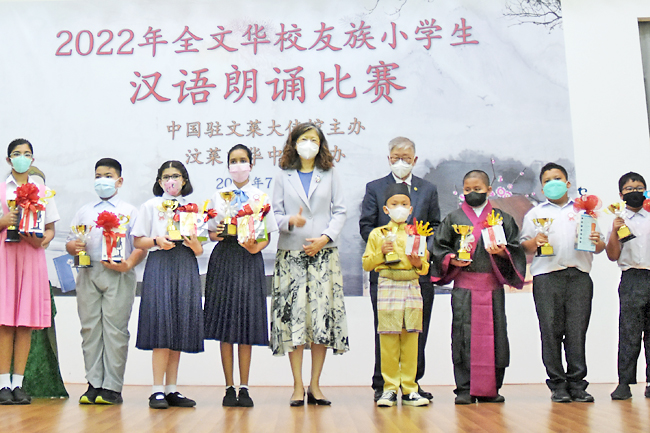 Ambassador of China to Brunei Darussalam Yu Hong presented prizes to the winners.

The ambassador said, “The competition is the first Chinese language project of the embassy in Brunei, in collaboration with the Centre of Language Education and Cooperation Centre in China.”

“It is known as the Chinese ‘Olympic’ competition.”

She hoped students in Brunei Darussalam can one day join the ‘Chinese Bridge’ competition.

Chairman of Chung Hwa Middle School BSB’s Board of Directors, Ong Tiong Oh stressed the importance of the Chinese language, stating that the rapid development of China’s economy will also provide more development space and opportunities for students learning Chinese.

Meanwhile, upper category winner Year 4 Sai Swaroopah said “I am happy and proud to be able to win. I wanted to learn Chinese because I think it’s a very interesting language.

“I found it a bit difficult to write Chinese characters however I can communicate in Chinese quite well. I also felt that it is important to learn Chinese to better communicate with people from China.”

Year 6 Lia Sarker said, “It is really good to know another language like Chinese. I was inspired by my godmother who is Chinese and has taken care of me since I was a baby. Chinese language is being used almost everywhere, so its very convenient to know to how to speak it.”