NAXOS, GREECE (AFP) – On his bougainvillaea-covered farm on the Greek island of Naxos, Yannis Karganis milks his sheep, wondering anxiously how he will cope with soaring costs and keep his cheesemaking business afloat.

After the war in Ukraine sparked an inflationary spiral in the price of cereals, fuel and other goods, farmers on Naxos and across the country have been left fearing for their survival. “I earn nothing from my cheeses,” said the septuagenarian, who makes Naxos graviera, a hard yellow cheese popular throughout Greece and beyond.

“I work day and night and despite this, I still cannot live.”

Inflation in Greece rose to 12 per cent in September before dropping to 9.1 per cent in October. Even though the government announced nearly EUR280 million (USD291 million) in support benefits for young farmers earlier this year, there is still heavy pressure on the country’s agricultural sector which employs 11 per cent of the workforce.

“Last year, a bag of feed cost EUR14. This year it’s EUR21. Gasoline has skyrocketted to EUR2.30 per litre at the moment,” the greying Karganis sighed, stirring a large cauldron to make cheese in his small kitchen.

Throughout the country, social pressure is rising in the face of soaring energy prices. In November, a general strike on the issue paralysed Greece. Head of the union of Naxos Agricultural Cooperatives Dimitris Kapounis, warns that if nothing changes “in the medium term, there will be no more milk on the Greek market, no meat, potatoes, or anything else”.

Naxos graviera – made from 80 per cent cow’s milk and 20 per cent sheep or goat’s milk – is one of Greece’s most popular cheeses. The Greeks like it sprinkled on pasta, fried or as a table cheese. 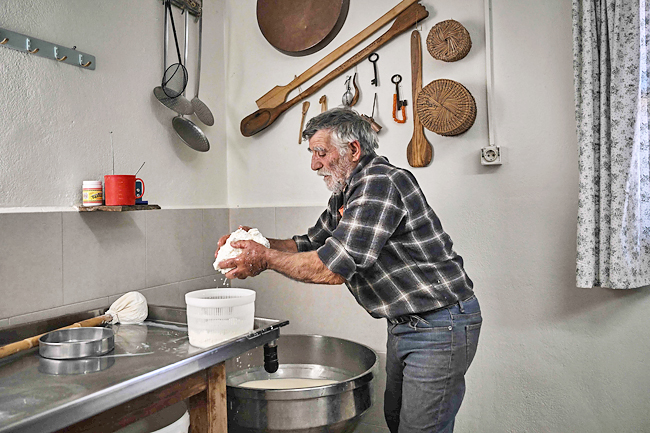 But even carrying the vaunted European Protected Designation of Origin label, and exporting to a dozen countries including the United States and Germany, hasn’t helped stem the slide in output as costs ramp up.

This year, the usual annual production of more than 1,250 tonnes has already fallen by 130 tonnes, the cooperative said.

The squeeze on animal feed and fuel has resulted in a fall in milk production, explained local shepherd Yannis Vavoulas.

“We can’t maintain feeding them properly,” the 42-year-old said.

“We feed them two or three times (a day) with little food,” which means the animals produce less milk. The crisis is so acute that some farmers have had to slaughter part of their herd, further reducing milk production.

Yorgos Margaritis, who owns 250 cows, is one of the local farmers to have already made this painful decision. He gestured to some of his nearby animals which he said would normally have been inseminated by now for producing calves. “(Instead), they will be slaughtered,” he said. The cost of transporting goods from the Greek mainland is also becoming prohibitive – it takes more than five hours by boat to get from the main Greek port of Piraeus to Naxos.

In an act of desperation, the Naxos cooperative in April went as far as neighbouring Bulgaria to buy animal feed, where prices are lower.

“If the milk producers are not helped… then we are all lost,” warned head of the largest cheese factory in Naxos Yannis Kavouras.

And as the European Union’s protected status regulations permit only the use of local milk, shipping it in from elsewhere is not an option either.