RAJANPUR (AP) – The first five months of Shakeela Bibi’s pregnancy were smooth. She picked out a name, Uthman, made him clothes and furniture. She had regular checkups at home and access to medicine. Then an ultrasound revealed the baby was upside down. The doctor told Bibi to take extra care and rest.

And then came this summer’s massive floods. Bibi’s home in the southern Pakistani city of Rajanpur was inundated.

When she spoke to The Associated Press last month, she was living in a camp for displaced families. With her due date approaching, she was afraid over the possibility of a breech birth with almost no health care accessible.

“What happens if my health deteriorates suddenly?” Shakeela said. She has a blood deficiency and sometimes low blood pressure, but she said she can’t have a proper diet in the camp. “I’ve been in a camp for two months, sleeping on the ground, and this is making my situation worse.”

Pregnant women are struggling to get care after Pakistan’s unprecedented flooding, which inundated a third of the country at its height and drove millions from their homes. There are at least at least 610,000 pregnant women in flood-affected areas, according to the Population Council, a United States-(US) based reproductive health organisation.

Many live in tent camps for the displaced, or try to make it on their own with their families in flood-wrecked villages and towns. Women have lost access to health services after more than 1,500 health facilities and large stretches of roads were destroyed. More than 130,000 pregnant women need urgent care, with some 2,000 a day giving birth mostly in unsafe conditions, according to the United Nations (UN). 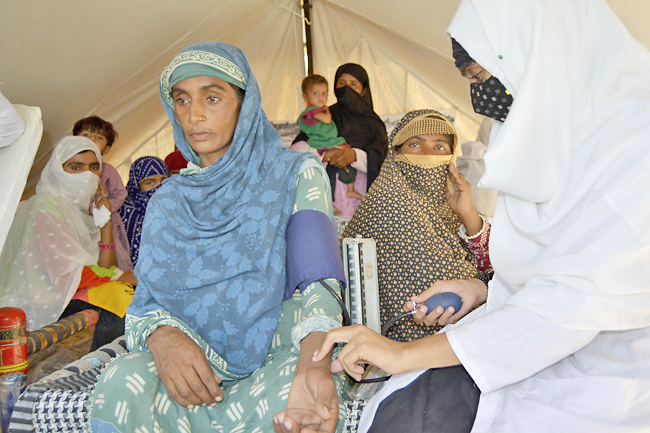 Experts fear an increase in infant mortality or health complications for mothers or children in a country that already has one of the highest maternal mortality rates in Asia. They also warn of dangerous, long-term repercussions for women, such as an increase in child marriage and unwanted pregnancies because of the disruptions in the lives and livelihoods of families.

Humanitarian analyst at the UN Population Fund Rasheed Ahmed said the health system was already poor before, and he warned now of “death, disability, and disease” if the health of pregnant women is ignored.

“The biggest shortage is female health care workers, medical supplies and medicine,” he said. “Resources are another challenge. What are the government’s priorities? Are they willing to spend the money?”

At camps in the flood-hit towns of Fazilpur and Rajanpur, pregnant women told the AP they had received no treatment or services for their pregnancies since arriving at the camps nearly two months ago. Clinics handed out medicines for minor ailments, but nothing for mothers-to-be. The next day, after the AP visited a local medical centre to alert their plight, female health workers went to check on the women and distribute calcium sachets and iron supplements.

Shakeela Bibi and her family eventually left the camp, taking their tent with them and setting it up close to their wrecked home. Authorities gave them a month’s worth of flour, ghee, and lentils. She is now past her due date, but doctors have assured her that her baby is fine and don’t think she will need a Caesarian.

Perveen Bibi, an 18-year-old who is five months pregnant and not related to Shakeela, said the lack of health facilities in the camp forced her to travel to a private clinic and pay for an ultrasound and check-up. But she was prescribed medicine she can’t afford to buy.

“I used to have a good diet, with dairy products from our livestock,” she said. The family had to sell their livestock after the floods because they had no place to keep them and no way to feed them.

“We need female doctors, female nurses, gynaecologists,” said Bibi, who has one daughter and is expecting a boy. She had a son around a year ago, but he died a few days after his birth. “We can’t afford ultrasound or IV. We’re just getting by.”

In the camps, families of five, seven or more eat, sleep, and spend their days and nights in one tent, sometimes with just one bed between them. Most sleep on floor mats. Some survivors only have the clothes they fled in and rely on donations.

Outdoor taps are used for washing clothes, washing dishes, and bathing. The pregnant women said there were shortages of clean water and soap. They were scared of infections because of open defecation at the camps. A bathroom was set up, but it has no roof and tents surround it.

Amid the devastation, organisations and individuals are doing what they can – the UNFPA is delivering supplies for new-born babies and safe delivery kits across four flood-hit provinces.

A Karachi-based non-governmental organisation (NGO), the Mama Baby Fund, has provided 9,000 safe delivery kits, which include items for new-borns, across Sindh and Baluchistan provinces, as well as antenatal and postnatal check-ups for 1,000 women. The Association for Mothers and Newborns, also based in Karachi, has provided more than 1,500 safe delivery kits, mostly in Sindh.

Ahmed from the UNFPA said pregnant women have different needs to the rest of the displaced population, needs that aren’t being met by state efforts.

“The government’s response is very general, it’s for the masses. It’s about shelter, relocation,” Ahmed said. “I’ve heard about women miscarrying because of mental stress, the physical stress of displacement and relocation,”

The health crisis triggered by the flooding will reverberate among women because it will take long to rebuild health facilities and restore family planning, according to Saima Bashir from the Pakistan Institute of Development Economics.

“Women and young girls are very vulnerable in this situation,” said Bashir. She pointed to increasing reports of child marriage.

The rate is increasing for several reasons. Some parents marry off their daughters as a way to obtain financial support from the boy’s family so they can rebuild their homes.

Others fear for the safety of their girls in displaced camps and believe marrying them off will protect them from abuse or secure their future.

Also, the destruction of schools in the floods closes off other options; some girls who would have gotten an education or possibly gone on to work will stay at home instead.

In the next few years, those girls will get pregnant, Bashir said, especially given limited access to contraception.

“There will be more unwanted pregnancies,” she said. “This is… compounding this crisis, and it’s adding to the population.”