Striving to keep the beat

HONG KONG (AFP) – A thundering thrash metal riff reverberated through a Hong Kong live music venue, but the music was being streamed from a studio across town to obey pandemic rules that have outlawed small gigs for more than 650 days.

The coronavirus has battered live performances around the world, especially in the first 18 months, but nowhere has that hardship lasted longer than in Hong Kong.

While gigs, festivals and international touring have returned with a vengeance globally, Hong Kong’s musicians have had no such luck.

For the vast majority of the pandemic the city has banned live performances in any place that serves food or drink.

Venues such as The Wanch, one of the city’s oldest live music cafes, have had to get creative.

“We’re just trying to do what we can to stay alive and keep the music going,” John Prymmer, the bar’s co-owner and a fixture of Hong Kong’s live music scene, told AFP from Sunset Studios, from where the live music was being streamed. 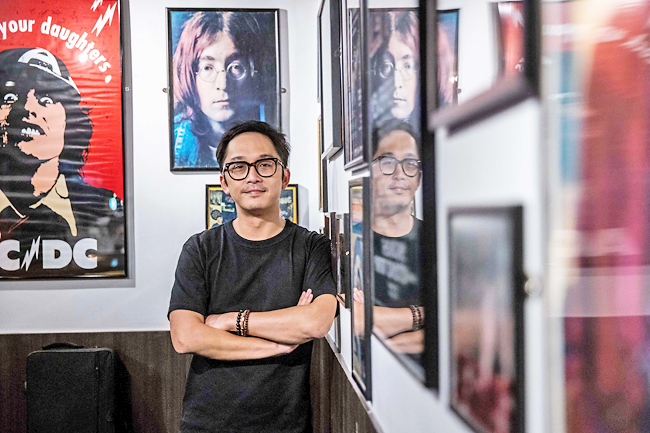 In a sound-proofed recording studio next door, local metal act Ozmium are careening through a mixture of their own tracks as well as covers of Iron Maiden and Metallica.

For now, a laptop screen perched in front of the band showing revellers inside The Wanch is the closest they can get to their fans.

Frontman Ashish Jerry Justin said he had looked on with desperation as other businesses such as karaoke rooms, cinemas, banquets and hotpot restaurants have been allowed to resume.

“And still in a place like a cafe, you cannot have live music even if there is a plexiglass separating us from the people who are watching us,” he said. “I think it’s highly unfair.”

Hong Kong has stuck to a version of China’s zero-COVID system throughout the pandemic, which has hammered the local economy.

While business hub rivals such as Singapore, London and Tokyo have re-opened, Hong Kong has kept up mandatory hotel quarantine, currently at three days.

Live music has been classified as a high-risk activity by authorities, and banned for more than 650 of the slightly over 900 days since restrictions were first introduced in early April 2020.

Head of the Hong Kong Musicians Union Lito Castillo estimates the job losses to be “in the thousands”.

A professional keyboardist who is married to a singer, he said his family’s income is now 30 per cent of what it was before the pandemic, mainly earned from working tables in restaurants.

“I’m down to my last dollar, at the moment we are just surviving, that’s all,” he told AFP.

Others have pawned instruments and switched to the gig economy.

One of the city’s most talented guitarists now works for an international courier company, Castillo lamented.

Many venues have closed, including Peel Fresco which shut its doors this month after 16 years.

“The past three years have made it impossible to run a live music business in Hong Kong,” the owners wrote on Facebook.

The mental toll has been intense. In a recent survey, the Hong Kong Musicians Foundation found 11 per cent of its members have had suicidal thoughts in the last year.

“I think ‘grim’ is an understatement,” said singer-songwriter and former Cantopop recording artist who is one of the foundation’s directors Adrian Fu.

Both the foundation and Castillo’s union said letters and lobbying to the government had gone unnoticed.

Fu said he hoped authorities could see the importance of live performances to the economy but also Hong Kong’s reputation as an international city of culture.

“It is a huge, huge factor in the incubation of talent,” he said of small venues and live bars.

A spokesperson for city leader John Lee said the government “understands the ardent expectations of the live music sector for relaxing social distancing measures” but gave no details on when or whether the ban would be lifted.

The Culture, Sports and Tourism Bureau – set up in July to promote Hong Kong as a “centre for international cultural exchange” – declined to comment.

Owner of live music venue The Aftermath Alicia Beale said she had tried to focus on the positive creativity artists had shown.

Her venue has done live-streamed gigs, recorded fundraising albums and pivoted to whatever it can to draw people in, from quiz and game nights to support groups.

“It’s just been survival mode throughout the pandemic,” she said.