Stepping up the game

His Royal Highness Prince Haji Sufri Bolkiah yesterday morning called on national sport associations to make early in depth preparations for athletes and not wait or depend on the Ministry of Culture, Youth and Sports as well as Youth and Sports Department to carry out preparations and planning for them.

“The associations must be united with their athletes to achieve the goal of bringing glory to the country.

“Disputes within associations will not result in success and will lead to its downfall. Therefore it is vital to be creative in looking for solutions to ensure that harmony within the associations and athletes are always maintained,” His Royal Highness, who represented the Brunei Darussalam National Olympic Council (BDNOC) in the meeting as its president, said in a sabda during a post-mortem meeting on Brunei contingent’s performance in the Commonwealth Games 2022 in Birmingham, England.

Held at the conference room of the Hassanal Bolkiah National Stadium, His Royal Highness congratulated the Chef de Mission and members of the secretariat as well as coaches for the cooperation to the national athletes during the games.

His Royal Highness also congratulated the national athletes who gave their best and improved their personal and national record. Despite not being able to obtain medals, His Royal Highness expressed, “Our athletes have shown a fighting spirit to not back down easily.” 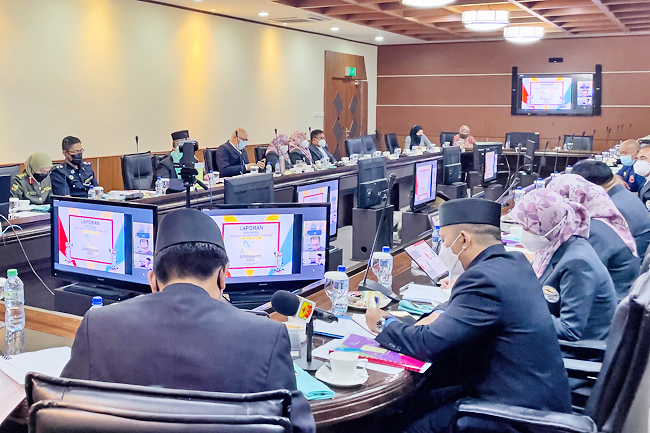 “I found that the weightlifting athlete was able to keep his promise of smashing his personal best record and national record and has shown a high fighting spirit.

“Therefore I hope that the athlete continues to train, compete in future competitions and set his target to qualify for the Paris Olympic Games 2024,” His Royal Highness said.

Meanwhile, for lawn bowling athletes, His Royal Highness said, “Our female athletes can further raise their capabilities to compete in regional or international lawn bowl competitions.

As for the male lawn bowl athletes, there is room for improvement as a team in the men’s four event.

“Only one person was able to display good performance. This cannot raise the performance quality of the team. Male lawn bowl athletes need to work harder to raise their performance if they want to represent the country.

“They also need to prove their achievement before being identified and enlisted to the assessment and selection committee for national athletes.

“I would like to urge all national athletes to continue to train hard to bring glory for the Sultanate in regional and international competitions.”