Curry scored 10 of his 33 points in a tight fourth quarter to go with nine assists and seven rebounds, leading the Golden State Warriors past the Miami Heat 123-110 on Thursday.

He pounded his chest with both hands and hollered in delight after a dazzling sequence in which he crossed over twice to lose Herro, then stepped back and sunk a three-pointer with 5:32 remaining that put Golden State ahead 108-100.

“It was a great move,” teammate Draymond Green said. “He got to the spot that he wanted. Once he got Tyler to open his back leg up, he was kind of dead at that point. Steph is incredible and he’s playing great to start this year off, which is expected. He continues to improve, which is scary that that guy continues to get better. It’s pretty interesting and fun to watch.” 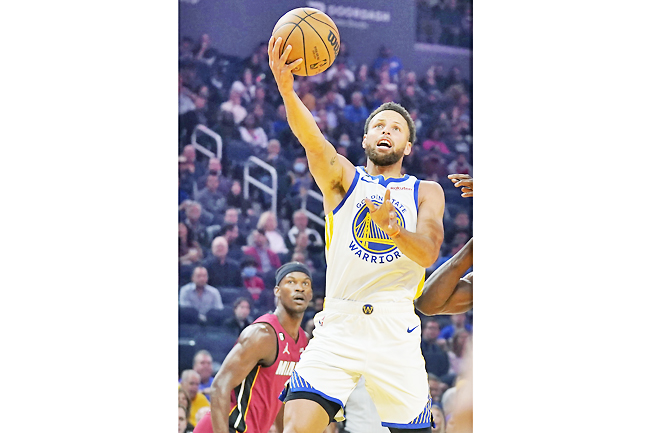 Andrew Wiggins added 18 points and 10 rebounds for the Warriors, and Klay Thompson had 19 points with five three-pointers.

Jordan Poole drove into the paint and made a pretty pass around Bam Adebayo’s waist to hit Ty Jerome, who knocked down a three-pointer with 9:36 left for a 100-92 lead then Poole’s jumper at the 8:07 mark made it 102-94.

Jimmy Butler scored 27 points, Adebayo 26 and Kyle Lowry had 12 points and eight assists for Miami in the second game of a back-to-back after a 119-98 win at Portland.

“I thought it was our best defensive game, which isn’t saying much given the other four. It just felt like a more typical Warriors performance where we were getting stops consistently and then getting out and running,” coach Steve Kerr said.

“Other than a few careless turnovers I thought it was the best we’ve played at both ends, and of course Steph was just sublime. What he’s doing is incredible.“