The State Mufti’s Office of the Prime Minister’s Office (PMO) yesterday held a Doa Kesyukuran and appreciation ceremony to mark 60 years of the Fatwa Institution in the Sultanate at Darulifta lobby, Jalan Pengiran Babu Raja.

Acting Director of Administration at the State Mufti’s Office Haji Saiful Nizam bin Haji Sulaiman shared that over the past six decades the Fatwa Institution has experienced many changes.

He said, “In 1994, the State Mufti’s Office was established under the PMO.

“With the establishment of State Mufti’s Office, disseminating information on Islam could be conducted and coordinated more efficiently.”

He added that publications under the State Mufti’s Office have received recognition nationally and abroad, including Best Publisher Award for the Ilmiah publication in 2013 and 2015 in conjunction with Brunei Book Fair 2014 and 2015-2016. 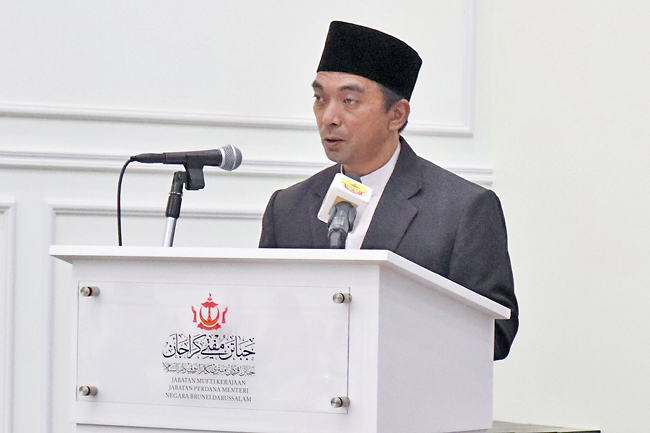 The institution also received Anugerah Perdana, Penerbit Nusantara organised by the Yayasan Buku Negara, Malaysia in 2014, and the ASEAN Best General Book Award 2018 for The King Who Shapes the Country.

In his speech, the State Mufti said that prior to 1962; Brunei Darussalam had yet to appoint a state mufti.

“The Fatwa Institution was first established under the Religious Affairs Department in 1962,” he said, tracing the institution’s beginnings.

In April 1, 1962 the Johor Government agreed to loan Haji Ismail bin Umar Abdul Aziz to become the State Mufti of Brunei for three years until 1965 and later consented to re-appointed in 1967 until he passed away on February 3, 1993.

He said, “In 1986 the instution came under the Syariah Affairs Department at the Ministry of Religious Affairs.

The State Mufti added, “From this, we can see the importance of the Fatwa Institution, as well as the responsibility of the state mufti in serving directly under His Majesty.

“This is because the state mufti needs to educate, and provide guidance while reminding people on the danger for those who have deviated.”