THE WASHINGTON POST – Jenna Knauss, a 35-year-old mother of twin nine-year-old girls, said she came up with “every excuse in the book” when trying to reduce household waste.

“I think I can speak for most parents when I say that my biggest fear was adding one more thing to our already busy lives,” the Lenox, Massachusetts psychotherapist said. “Life is hard enough – we are just one family – don’t we have enough on our plates?”

But after taking a hard look at her complacency, Knauss realised she needed to take action.

“I felt like a hypocrite talking about my worries about the future of our environment in conversations with my children but continuing to put off measurable change,” Knauss said.

“So I decided to take action by showing how to reduce household waste rather than just telling my kids.”

She and her family have specifically been focussing on how much food they waste.

The average American family creates about 18 pounds of trash daily, most of which could be recycled but isn’t. That amounts to 6,570 pounds of household waste per family annually, with more than 24 per cent of the garbage in landfills being wasted food. 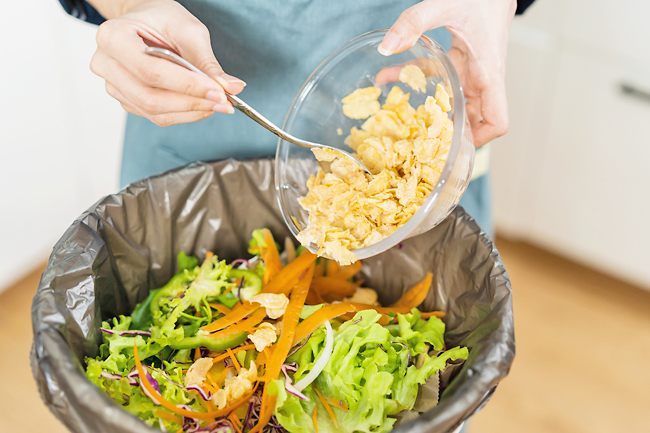 You may not be able to save the planet single-handedly, but making a conscious effort to reduce not only helps the Earth but teaches children the importance of what we consume and how we dispose of it. While the climate crisis can feel almost impossible to reverse, reducing food waste at home as a family can be a great place to try to help.

“There’s no question that the most significant area for improvement when it comes to eliminating waste is food,” said an assistant dean of innovation and strategic initiatives at Arizona State University’s (ASU)College of Health Solutions Christopher Wharton.

In fact, in America, we throw out about a third of the food we produce, said the Nature Conservancy’s chief scientist Katharine Hayhoe. “As it decays, it produces so many heat-trapping gasses that if global food waste were its own country, it would be the fourth-biggest emitter in the world.”

Hayhoe suggested a simple shift: “If you can, shop more often, buy less and plan ahead, so you waste less.”

In 2021, the city of Phoenix collaborated with Wharton on a study to reduce food waste in alignment with their goal to become a zero waste city by 2050. Wharton discovered there’s no one-size-fits-all approach to limiting waste, and encourages people to try whatever works for them. “People care about behaviour changes in different ways and for different reasons,” Wharton said.

He and his team began by telling study participants that United States (US) households create 45 million tonnes of food waste annually. For the study, more than 60 households received food-grade scales and clear plastic bins for weighing and food waste collection.

Households weighed their food waste weekly and reported back to researchers, who then offered tips on how the participants could reduce waste each week.

The study’s results revealed that participating families reduced food waste by more than 25 per cent. Wanting to share what they learned, Wharton offered his tips on ASU’s Global Institute of Sustainability and Innovation website.

One method of reducing our carbon footprint is to adopt what is called a zero-waste lifestyle. This doesn’t mean we create no waste at all – that’s impossible. But instead, it’s a way to think about and reduce consumption and waste in landfills.

“Trying to live a zero-waste life while simultaneously raising a family can feel impossible, but it’s not,” says Anita Vandyke, an environmentalist and author of A Zero Waste Life and A Zero Waste Family. “Being a zero-waste family is about doing what you can when you can.”

Radically reducing waste doesn’t happen overnight, but we can reduce our carbon footprint by making a few changes. Knowing parents are constantly juggling their children’s needs, work and money, Vandyke wrote A Zero Waste Family not to add guilt but to offer lessons she learnt while navigating motherhood.

When it comes to food and the packaging that comes with it, for instance, she suggests families shop smarter by scouring the supermarket’s outer aisles and bulk stores for package-free food. Globally, packaging is the largest source of plastic waste. Containers and packaging alone account for 23 per cent of material in landfills in the US.

Vandyke also suggested families compost together and set up a system that works for them. This might be as simple as contributing to a compost bin in a community garden or making your own. Websites such as Litterless show where you can compost.

Today, more than 200 US cities have curbside composting programmes. California and Vermont, which have made composting mandatory, point out to residents that farms using compost can grow up to 40 per cent more food in times of drought.

Vandyke suggests everyone have a “portable kit,” where a reusable tote bag with a reusable water bottle, coffee cup, stainless steel straw, spork and a cloth napkin is readily available.

Where you shop can make a difference, too. Grahame Hubbard, a father of 13- and 14-year-old daughters, is acutely aware of the impact of household waste on the environment.

“I grew up on a fishing boat in Australia, in a culture that didn’t waste anything. Plus, I was very aware of food shortage as a child,” Hubbard said, “so it’s important to me that my daughters don’t waste.”

When Hubbard’s daughters were younger, he shared with them that more than 40 per cent of freshly packaged foods and farm produce around the world end up in a dumpster. At the same time, more than 800 million people worldwide don’t have enough food. That conversation prompted Hubbard and his family to search for companies that recycle food that would have otherwise ended up in a landfill.

Hubbard and his family use ReGrained, a food company that “rescues grain and transforms it into a brownie mix,” he said. They also have a subscription with Misfits Market, which delivers organic produce that “isn’t as aesthetically appealing and might be tossed, which we plan our meals around.”

During the pandemic, Hubbard and his family left reusable cloth bags with handmade cards and daffodil bulbs on their neighbour’s doorsteps as gifts.

Afterward, Hubbard, the owner of Plant Specialists, a Manhattan landscape design firm, donated flowers, herbs and potato vines, which he and his daughters helped plant in their neighbours’ planter boxes using local compost. “

The gesture really built a community and offered my girls a sense of agency,” he said, noting the neighbours became more interested in composting. “I couldn’t help thinking, this could be such a better place if we could just get people excited about composting and gardening.”