Incorporating Italian and Renaissance architectural styles yet reflecting classical Islamic architecture, the mosque took four years to complete and is one of the most unique Islamic places of worship across the globe.

Under his reign, Al-Marhum Sultan Haji Omar ‘Ali Saifuddien also steered the Sultanate safely through the turbulent years post World War II, establishing the foundation for the nation’s independence and sovereignty as well as the infrastructure, society and economy of modern Brunei. Through his determination and dedication, the Sultanate independently preserves its Malay Islamic Monarchy philosophy in the modern world.

The JPP further celebrated the issue by choosing September 23 as the date to release the sale of the FDC and commemorative stamps of SHOAS Bridge, marking the birth anniversary of Al-Marhum. 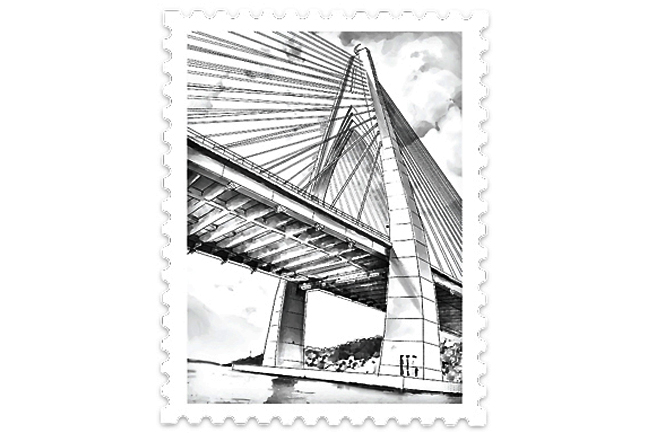 The bridge, built to facilitate the movement of people delivering goods and services between Brunei-Muara and Temburong districts, is also the best symbol of modernity for the Sultanate.

The bridge was opened to the public on March 17, 2020, days after the first COVID-19 outbreak.

The JPP issued the official FDC – a set of three pieces of BND1 stamps and a special mini sheet.

For the initiative, Ikmalina Hakimah binti Haji Md Yunos was brought in as the designer while the SHOAS Bridge Project Secretariat under the Public Works Department (JKR) of the Ministry of Development (MoD) prepared the texts and images. Ikmalina shared that the inspiration came from the feeling of being honoured to be a part of a historical moment in the Sultanate.

The focus led to producing designs and illustrations from an artist’s perspective for the official commemorative stamps of SHOAS Bridge, the latest addition to Brunei’s landmarks.

The majestic Islamic structural design of the bridge also invited the designer to assess and explore more on the magnificent architectural beauty of the bridge.

Ikmalina wished to interpret the bridge in the form of sketch illustrations while focussing on the star and crescent symbols on top of each tower shape vertical structures, symbolising Brunei as an Islamic nation.

The design process also involved getting in-depth knowledge of the bridge, such as why it was built, how it was built and the overall look once it was finished.

“I made different prototypes of various genres, creating traditional and modern designs using actual pictures as references, and presenting diversed designs to the elected design committee while pertaining certain rules and limitation stated.

A time frame of at least a month was allocated to reconfigure the proper designs which included three times of revision with the design committee and a few technical and appropriate modifications.

The actual photo references, 3D-rendered file of images and the sketched illustrations were compared side-by-side to ensure cohesiveness, according to the designer.

“It was my design assignment from the government, to produce a new collection of commemorative stamps. My other work includes mostly mural and one digital design for Buku Wawasan 2035 to be published by the Prime Minister’s Office,” said Ikmalina.

She also did works for Brunei Landmarks such as Padian Boat Floor Mural themed ‘Puak Dusun’ for the floor mural project on Jalan Roberts (digitally and physically painted on the floor), organised by the JPP in 2020 and Brunei Shell Petroleum (BSP) Billionth Barrel Wall Mural with other artists to celebrate 90 years of the company.

Her work for this event is a mural with the theme, ‘Brunei Independence in 1984’.