About 72 per cent of Brunei is still covered by forests, and about 58 per cent of this is conserved under the Heart of Borneo initiative.

Brunei’s peat swamp and lowland forests are still among the best preserved in the region, and indeed constitute rare and precious ecosystems which are believed to play a key role in global climate control.

This was stated by Permanent Secretary (Planning, Land Use and Environment) at the Ministry of Development (MoD) Dr Nor Imtihan binti Haji Abdul Razak in her presentation, ‘BNCCP – Towards a Low Carbon and Climate Resilience Brunei Darussalam’, during the afternoon session of the ‘Brunei Darussalam Conference On Forest: Forests and Biodiversity: Unveiling Its Economic Potential’ in conjunction with the Brunei Mid-Year Conference and Exhibition (MYCE) 2021.

She said, “According to the World Meteorological Organisation (WMO) in 2020, globally greenhouse gas emissions remain high, despite the COVID-19 pandemic. The year 2020 was one of the warmest years with temperatures reaching about 37 degrees Celsius in the North of the Arctic Circle.

The trend in sea-level rise is accelerating; and Antarctica’s mass loss is approximately 175 to 225 gigatonnes of ice per year. The world is not cooling down but due to exceed the thresholds of either 1.5 degrees or two degrees above pre-industrial levels, which means the effects of climate change will be beyond what is already seen.”

She said, “Brunei only contributes about 0.025 per cent to the global carbon emissions. However, we can already see and feel the impact. Currently, there is a few early evidence of climate change especially in rising sea levels, rainfall, forest fires and landslides.

“In Brunei’s adaptation to climate change, the country’s national policy goal is towards climate resilience and the government has spent about BND68 million in infrastructure under the National Development Plan, which focusses on water security, flood mitigation and improved sanitation.

“However, nature-based solutions could address our efforts far more effectively and sustainably.

“In recent years, there has been worldwide adoption and rapid proliferation of the ‘nature-based solutions’ concept, emphasising on the role of trees, forests and forestry, as forests have three benefits such as absorbing carbon emissions, increasing resilience, and hosts biodiversity.

“The need to strengthen the resilience of Brunei forests against climate change threats is further accentuated by its prevailing roles as carbon sources, when removed or carbon sinks, when preserved. Forests remain as today’s most effective nature-based solution for climate mitigation, as it is for climate adaptation. The restoration of forests not only reinstates the ecological functioning, but it also accelerates the recovery of biodiversity.

“The Brunei Darussalam National Climate Change Policy (BNCCP) was introduced in June 2020, aimed at paving the nation’s pathways towards a low carbon and climate-resilient future, through 10 key strategies.

“Strategy Two of the BNCCP focuses on increasing the national carbon sink value to stabilise the country’s greenhouse gas emissions in the long run, through preservation of the country’s 72-per-cent forests coverage, and planting new 500,000 trees by 2035.

“Enabling robust policies on sustainable forests management as well as sustainable land use development is crucial in preserving Brunei Darussalam’s green ecological system, and to do so with the utmost urgency.

“Increasing our carbon sink through sustainable forests management presents us with vast opportunities for a green economy transition – green investments on reforestation programmes, nature based eco- tourism, ecosystem services, forests management and certification, as well as expansion of the agroforestry sector to name a few.

“With the ongoing strengths, we must strive to achieve our vision of being a low carbon and climate resilient nation.”

Before ending her presentation, the permanent secretary described the average Bruneian’s carbon footprint as being around 10 tonnes of carbon dioxide equivalent per year, which is equivalent to 10 two-storey houses.

“To offset these emissions, 200 trees would need to be planted annually,” she said. 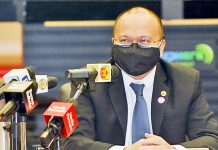 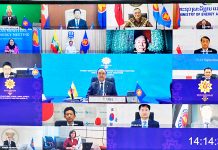 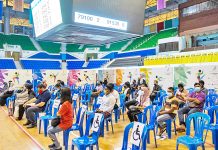