THE WASHINGTON POST – The drag races started at midafternoon in the pothole-pocked parking lot in Northeast Washington. The temperature was in the mid-90s. The asphalt shimmered. In the near distance, the decaying hulk of RFK Stadium loomed.

Two-by-two, cars inched up to the spray-painted starting line and prepared for the countdown. Necks craned from the enthusiastic dozens of people who stood near the start of the short track waiting for the signal. Then – pheeeeoowww!!! – a high-pitched screech, and the cars leaped forward.

This is the small, small world of remote-control (RC) racing, DC style, where on weekends hobby car enthusiasts have turned a chunk of the massive RFK lot into a fun zone for their battery-powered racing, wheelie-ing and ramp-jumping vehicles.

Remote-control or radio-control racing – RC as it’s known to fans – isn’t new, but it is enjoying a booming resurgence sparked in large part by the pandemic. Stuck at home with nothing to do, people sought out hobbies to fill their time and get them outside. Newcomers to RC were hooked. And many who built and played with the racing machines as kids rediscovered the thrills of driving and the satisfaction of spending hours souping up cars that at the top end can reach speeds of 150 to 170mph.

Now, after discovering – or rediscovering – RC, they’re finding like-minded enthusiasts on social media and in real-life racing and off-roading meetups.

The kit cars and trucks – most of which are 12-to-24-inches long and weigh from 10 to 30 pounds – look like a mini-me of real-deal racecars and monster trucks. They are hot pink and deep purple and lime green and Day-Glo orange – sometimes all of those colours on the same car. The ones with the professional paint jobs and the sparkling rims look like they belong on a showroom floor. Others look like they are one blown tire away from the junk heap. 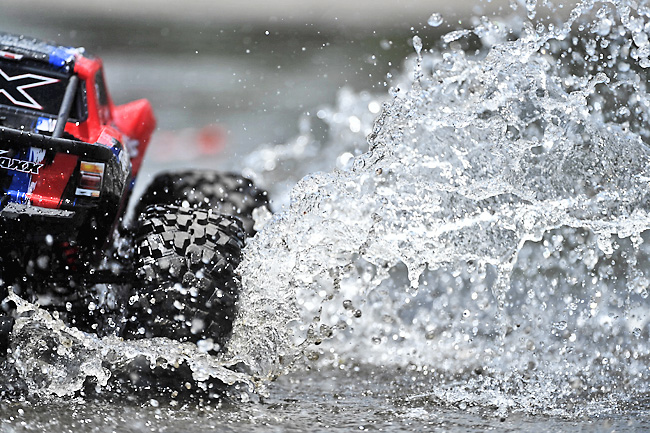 For their owners, they are a passion.

“We come down here every Sunday,” said Jarrett Thompson, 42, a teacher from Upper Marlboro, Maryland, smiling down at his son, Jayce, 6, who gave him a big smile back as they watched cars zip and flip around the RFK lot. A newcomer to RC, Thompson and son worked together to build the cars, paint them and prepare them to race. They now have five. Winning would be nice, but the reward, Thompson said, is finding something the two of them like to do together and finding others who share their interest.

“I had no idea this community was even here and now we come out whenever we can,” said Thompson, who learned about the meetups while visiting a hobby shop. “It’s just a whole lotta fun.

“Never in a million years did I think that I’d be getting a remote control car and spending money on paint and tools and shocks and batteries, but here we are,” he said. “Now, I’m trying to get my friends involved.”

On Sunday, more than a hundred people turned out for the DC RC Takeover, an all-day event of racing and jumping, music and food, trophies and togetherness that organiser Jorden “Jayrock” Ruth hopes will do as much to sate the racers’ competitive spirits as their desire to connect.

“It’s all positive. As long as people are smiling and having fun, I’m cool with it,” said Ruth, 26, a manager at a Boston Market who first became involved in racing in 2017.

Searching for a hobby while recovering from a car accident, Ruth first went to an arts and crafts store, but decided painting wasn’t for him. Instead, he bought a Lamborghini model at a toy store for USD60. It didn’t perform the way he’d hoped it would, so he visited Waldorf Rc & Hobbies shop and upgraded to a Traxxas Rustler for about USD350. And like many others in RC, Ruth didn’t stop at one. He now owns 11 cars and estimates he has spent about USD3,000 to USD5,000 on them.

RC doesn’t have to be expensive, but it can get that way in a hurry. A decent car, remote and battery, ready to drive out of the box, can be had for USD200. But hobbyists invariably want to tinker, alter and upgrade, and the costs can multiply. Manufacturers and store owners across the country saw demand surge during the pandemic for cars, tools and gear.

“COVID is what did this,” said Jesse Thomas, looking across the vibrant parking lot as the remote-control cars whizzed and whirled, zigged and zagged. “COVID exploded remote control.”

Thomas is general manager at the Hobby Works in Laurel, Maryland, and said his store has experienced a leap in sales of remote control vehicles and equipment.

Ruth held his first event in March, and the turnout was smaller. Just 20 or so people showed up. But he was encouraged, and more showed up in April. His goal is to have at least one racing event every month. For the most recent gathering, he paid for the trophies, put up fliers and posted on his Facebook and Instagram accounts to get out the word. By day’s end, he estimated about 150 people had come to participate or watch.

“When I got here this morning, there were already people arriving, so I knew it was going to be a good day,” he said.

Ruth doesn’t charge participants and isn’t trying to make money off the gatherings, but as they grow larger he does face a different issue. Police and security have stopped by to ask participants to move illegally parked (real) cars, but have not shut down the events. Ruth doesn’t have a permit for the RFK lot, but he said he will seek one out for the next day of races if he can find out who issues them.

“I’m trying to figure out who to talk to to make it a sanctioned event so that we won’t have to worry about anything,” he said.

Paralysed from the waist down from an accident eight years ago, Chris Risby, 43, rolled up to the starting line in his wheelchair, holding his black Arrma Felony on his lap. He pointed through the car’s small window to show off its working stereo system, a proud touch installed by Risby, who is a part-time DJ and music producer. With Risby was Chris Jones, his friend since their first day of kindergarten in Fort Washington, Maryland, when the boys saw each other’s nametags and realised they had an immediate bond.

“Chris got me back into it a few months ago,” said Risby, who lives in Alexandria, Virginia, with his wife and two college-age children and runs a home-inspection business with his father. “We used to race model cars in grade school, and now we’re back out here.”

After his accident, Risby said, there were some things he could no longer do, so he had to rearrange his life. Working on model cars the way he used to fix real trucks and cars in his garage “gets my mind off things. It’s another way of addressing my situation.”

Matthew Emmanuel, 34, came to the DC RC Takeover with his brothers George, 29, and David, 28. The Emmanuels live in northern Virginia, where they rediscovered remote control racing during the pandemic. All had owned and worked on model cars in high school but gave it up as they got older. When the country began to shut down, Matthew came across a used car that needed work and his interest was reignited. “Pretty soon, you fall in a hole where you have a collection of five, six or seven,” he said.

Discovering the community of like-minded enthusiasts during the past few months has been an unexpected bonus.

“It’s a different group of people that I would have never met otherwise,” said Emmanuel, a property manager who has made several trips to the RFK lot to race and jump his cars. “Everyone wants their cars to go faster than everyone else’s, but they’re all really nice. They’ll help you if you ask questions about how they got their car to do different things. It’s just a great community, a great overall vibe. Everyone has treated me fantastic.”

Jay Rodriguez, 31, is a newcomer to RC, but it didn’t take him long to develop an obsession. The construction worker from Manassas, Virginia, now has 20 cars. He only began collecting them last year.

“I was stuck at home trying to figure out something to do, and I got into it,” he said, with a laugh. “It quickly became an addiction.”

Rodriguez estimated he has spent USD15,000 on cars, batteries, chargers, tools and replacement parts. He likes the competitions, but he enjoys the comraderie even more and has become a regular racer at the RFK lot on Sundays.

“It’s good way to release some stress hanging out with a bunch of guys having a good time,” he said. “You just forget about everything. You’re just paying attention to the car and getting lost in it.” Rodriguez laughed again. “I guess it’s just men playing with toys.”