“Brunei Gas Carriers Sdn Bhd (BGC) has grown and evolved over the past 25 years transforming its fleet, developing its people, and continue to diversify its services following the demands of the shipping industry,” BGC Managing Director Captain Abdul Mateen bin Abdurrahman Liew said.

He made these comments at a ceremony to unveil the special 25th anniversary logo, kicking off the BGC’s silver jubilee celebrations.

“As a member of the sector, BGC also hopes to continue to fuel the maritime pipeline for Brunei Darussalam, working collaboratively with other organisations within the sector to produce highly skilled and capable individuals in line with Brunei Vision 2035. The significance of the 25th anniversary is multifold as it resonates deeply across all levels of the company, both onshore and on our vessels,” he said.

He also acknowledged that one of the most precious things to come out of 25 years of legacy is the strong bond fostered with one another.

“This is truly invaluable for it has kept us all together, through thick and thin.

“This togetherness, unity, and camaraderie symbolise our #TeamBGC identity, as a company that places its people at the centre of everything we do,” he added.

Describing BGC’s 25th anniversary logo, he explained that each element of the logo represents a specific story of what BGC embodies. 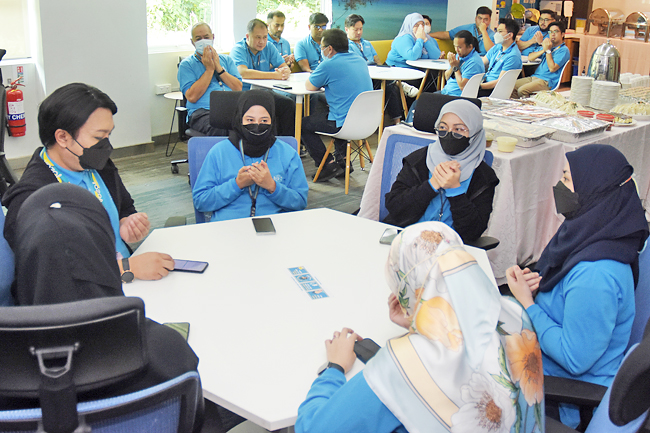 The number ‘2’, he said, “showcases different shades of the yellow gradient, featuring both the colour of the Brunei flag and corporate colour of BGC, signifying BGC’s commitment and contribution to the maritime industry in line with Brunei Vision 2035”.

“The number ‘5’ in different shades of blue showcases the corporate colour of BGC which also represents the journey of our vessels across the vast seas and oceans. The two curved lines extracted from the company logo, signifies BGC’s shipping journey since 1998, delivering cargo safely to international customers.

“The different shades of silver represent BGC’s 25th anniversary and the company’s commitment to continue to be a reliable and a safe shipping company for the next 25 years and beyond.

“BGC is proud of the legacy built around developing people and delivering excellence which is reflected in the slogan for the anniversary celebrations.

“Achieving silver jubilee is no ordinary feat, for this milestone demonstrates the success of BGC, and the role it has played in supporting both the Brunei Hydrocarbon Value Chain and the maritime industry.

“BGC is thankful for the contributions made by its people, both past and present, for they have helped transform and shape BGC into what it is today,” he added.

Having unveiled the company’s 25th anniversary logo, BGC looks forward to sustaining its corporate celebrations over a series of planned events scheduled throughout the year.

A series of events have been planned for the entire year including a release of a commemorative coffee table book, exclusive 25th anniversary merchandise, children’s book, special #BGC25 block, Walk-A-Hunt Family Day to celebrate their 25 years of legacy and capturing the company’s rich maritime history dating back to March 9, 1998.