THE WASHINGTON POST – When she was a young child, Elizabeth Miki Brina lived in her mother’s homeland of Okinawa, Japan’s southernmost prefecture.

She rode on her grandmother’s back, played under the subtropical sun, heard the roar of military jets and spoke Japanese.

Then, her parents moved her to the United States (US), and she didn’t think about Okinawa for three decades.

As she grew up, she spoke only English, knowing nothing of her mother’s history. “Which is to say,” Brina wrote, “that I grew up not knowing my mother or myself.”

Brina’s poignant memoir, Speak, Okinawa, is the story of her discovery of Okinawa as an adult – and discoveries about her mother and herself.

Brina also explores Okinawa as an overlooked piece of the American story in need of hard scrutiny. 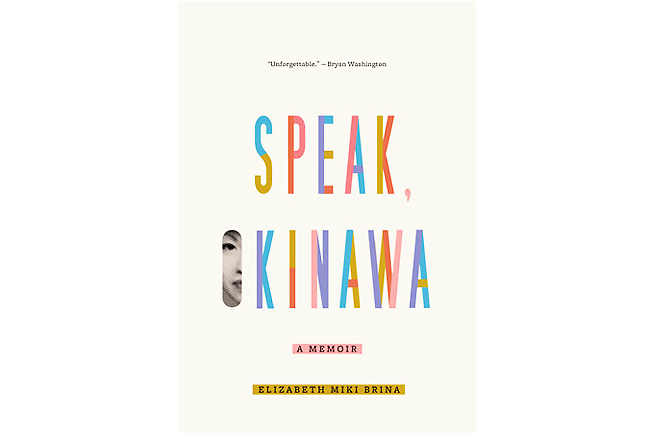 Once an independent kingdom, Okinawa was taken over by Japan in 1879.

In World War II, it was the site of a brutal battle between the US and Japan, and as Brina pointed out, many Americans know of Okinawa only in connection to that battle. But the wartime clash, which decimated the civilian population, wasn’t the end of the US involvement in Okinawa.

After the war, the US occupied Okinawa for 27 years, forcing thousands of Okinawans from their land to build sprawling military facilities.

Today, about one in eight US service members abroad is stationed in Okinawa. The US-Okinawa relationship has long been a fraught one because of the bases, which many locals protest as sources of noise pollution, traffic and training accidents, and crimes committed by US servicemen.

Like many Okinawans, her family survived the US occupation by working for the US military – building bases, serving cafeteria food, cleaning barracks. They lived in poverty, eating sweet potatoes for every meal, as military installations took over their island.

Brina’s mother dropped out of school in the eighth grade to work in a factory and later became a waitress in an entertainment establishment. By then the Vietnam War was raging, and the US military had turned Okinawa into a weapons depot and rest-and-relaxation destination, with tens of thousands of American troops stopping over on the island.

At the establishment, Brina’s mother met an American soldier from Manhattan, a college graduate from a wealthy White family. Brina imagines their meeting. He is “Elvis handsome” and seems “like a way out”. “She is beautiful, exotic… too vulnerable to resist.”

They married and eventually settled in the suburbs of Rochester, New York, where Brina grew up in a 99-per-cent-White community.

In her eyes, her father was her hero, the one with all the answers, who navigated their world with confidence and power.

“He knew what to say, and he said it so well,” Brina wrote. “His pronunciation was perfect.”

Meanwhile, her mother struggled to learn English and seemed “never entirely welcome” in their town, “never (able to) fully participate”. Brina, internalising the racism of her peers, idolised her father and was “cruel” to her mother. She alternately ignored her and mocked her; she cut up her dresses and kimonos for scraps.

As an adult, Brina contended with her own challenges, and began to empathise with her
mother’s pain.

Visiting her parents one weekend at age 26, she engaged in her “typical rant-exchange” over politics with her father during dinner, the two of them shouting different views and ignoring her mother.

When her mother started screaming and kicking, knocking over glasses, Brina joined her on the floor, curling their bodies together.

In earlier days, Brina might have run away, but in that instant she saw that “her trauma is my trauma, that our pain comes from the same source”.

Brina’s curiosity grew, and at age 34, she travelled to Okinawa and began to delve into its history of war, colonialism and survival.

In her mother, she began to see strength instead of weakness, the weight of history instead of personal failing.

She detected traces of Okinawa’s subjugation in both her own life and her mother’s, in the way they were “fighting to be acknowledged and understood. Fighting  to matter”.

This battle was most evident in their relationships with men. Brina’s father treated her mother “more like a daughter than a wife”. As a teenager, Brina began believing she must say yes to anything boys and men asked of her. When they found her attractive, she didn’t know “how to channel this attraction toward respect, toward care, toward love”.

The memoir becomes a testament to the importance of their lives as Asian women, as mother and daughter, and an apology for all the years Brina thought otherwise.

Speak, Okinawa is strongest when Brina is recounting, with piercing candidness and clarity, the almost claustrophobic world of an only child and her parents – their shifting allegiances, the wounds they inflict on each other and their rocky path toward acceptance, apology and forgiveness.

The memoir is also a portrait of the devastating effects of imperialism and racism on a person’s identity, self-worth and relationships-and offers a perspective on how a person can combat these legacies.

In the book’s early pages, Brina observes that she is “too American”. By the end, she wrote that her story is both American and Okinawan.

She claims her Okinawan identity in part by taking a stand against the injustices inflicted on Okinawa over the years. She points to the many crimes committed by US servicemen since World War II, including assault, murder and robbery, and opposes a new American base being built on the main island today. “Free Okinawa!” Brina wrote.

For years, Okinawans have been battling the US and Japan over this new base. Okinawa’s governor has urged the Biden administration to reassess the project, pointing out local opposition, environmental destruction, engineering issues and the disproportionate number of bases Okinawa already hosts, in service of the US-Japan security alliance.

In appealing to the President, Okinawa Governor Denny Tamaki highlighted the “strong, history-based ties between the US and Okinawa” and the thousands of Americans with Okinawan ancestry.

Like Brina, Tamaki was born to an Okinawan woman and US serviceman. Unlike Brina, he grew up in Okinawa, speaking Japanese, and not knowing his White American father.

Historically marginalised, mixed-race American-Okinawans like Brina and Tamaki, Japan’s first multiracial governor, are now speaking out to remind us of the long, tangled history of Okinawa and America.

They remind us that all Americans have a duty to know and atone for what Okinawa has endured.