Space mission shows Earth’s water may be from asteroids

TOKYO (AFP) – Water may have been brought to Earth by asteroids from the outer edges of the solar system, scientists said after analysing rare samples collected on a six-year Japanese space mission.

In a quest to shed light on the origins of life and the formation of the universe, researchers are scrutinising material brought back to Earth in 2020 from the asteroid Ryugu.

The 5.4 grammes of rocks and dust were gathered by Hayabusa-2 that landed on the celestial body. In June, a group of researchers said they had found organic material which showed that some of the building blocks of life on Earth may have been formed in space.

In a new paper published in the journal Nature Astronomy, scientists said the Ryugu samples could give clues to the mystery of how oceans appeared on Earth billions of years ago.

“Volatile and organic-rich C-type asteroids may have been one of the main sources of Earth’s water,” said the study by scientists from Japan and other countries.

“The delivery of volatiles (organics and water) to the Earth is still a subject of notable debate,” it said.

But the organic materials found “in Ryugu particles, identified in this study, probably represent one important source of volatiles”. 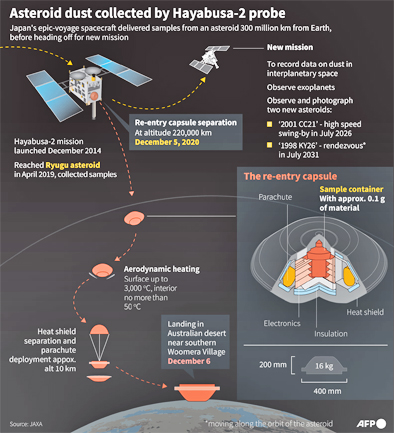