You are paying for the operating costs and profits of at least two growers, the seed farmer, shippers, marketers and the retailer.

We might speak of the folks providing the greenhouses, the pots, the labels, the soil mix, and the rest. There must be some lawyers and accountants in there somewhere – and assuredly the tax collector – and did we mention the fertiliser manufacturers and the energy companies and equipment manufacturers?

Suddenly it’s not a black-eyed Susan, it’s a Cecil B DeMille movie with a cast of thousands.

I don’t begrudge any of the actors the fruits of their work – the horticulture business is inherently labour-intensive and unpredictable. I have yet to see a nursery owner pull up in a Rolls-Royce. But for the home gardener, the cost of amassing dozens, or even hundreds, of plants is steep by anyone’s measure.

There is another way. It’s not easy or guaranteed, but it is economic and potentially one of the most rewarding things you will ever do. I refer to making your own plants from seed. Other propagating techniques are available to the enterprising gardener – cuttings and divisions, for example – but seeds offer the chance to create large numbers of plants while increasing the genetic diversity of a species. 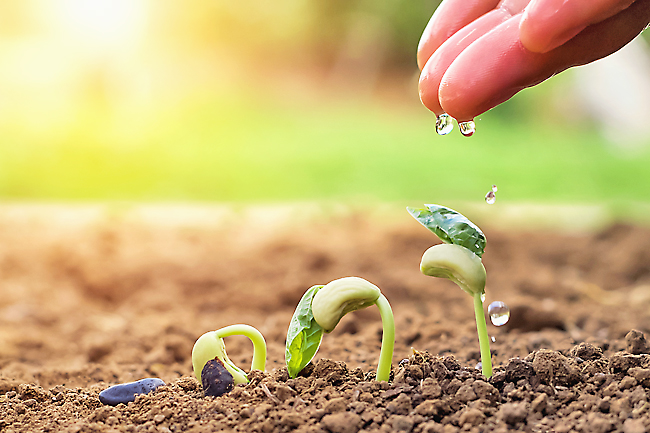 Growing from seed can be wonderfully foolproof or terribly frustrating, depending on the plant and how and when you try to coax it into life. But this is not a dark art.

Many gardeners readily grow vegetables and annuals either by directly sowing seeds into prepared beds or starting them in seed trays and pots. I’d say 80 per cent of the plants in my vegetable garden this year came out of a seed packet.

But what if we also turned to growing perennials and ornamental grasses from seed? A greenhouse is helpful but not necessary. These are hardy plants – they want to be outside. They need to be grown in protected areas, however, in a place that will be shielded from the extremes of sunlight, wind and deluge. A breezeway or screened porch might work, or beneath a deck (with sufficient natural light), or in simple raised beds and cold frames.

Timing is important and differs by species. Perennial seed divides into two basic types, said native plant programme manager Rochelle Bartolomei at Pope Farm Nursery in Gaithersburg, Maryland. Spring flowering perennials should have their seed sown by midsummer, in a seed tray outdoors in a protected site. Examples include bloodroot (Sanguinaria canadensis), wild geranium (Geranium maculatum), rue anemone (Thalictrum thalictroides), and woodland phlox (Phlox divaricata). The seeds will lie dormant through the fall and winter and germinate the following spring. Keep the seed mix moist but not wet, and protect the trays against marauding animals.

Plants that bloom from mid-summer into the fall need a period of cold storage in a plastic container or bag with moistened vermiculite or sand. This is called moist stratification, and the period varies from a couple of weeks to three months, generally, depending on the species. Bartolomei and assistant grower Becky Melzer store these bags, which must not freeze, in a fridge set at 38 to 42 degrees.

For example, milkweed species like 90 days of moist stratification, so she will start the process in December for sowing in March. Until they are ready for treatment, seeds are simply stored in the fridge in dry zipper bags.

Come late winter, you could start these seeds as you might tomato seeds – indoors under lights – though like the tomatoes they will need hardening off before planting out in mid-spring.

Melzer said that perennials that only need a few days of moist stratification can be germinated in late summer or early fall, and they will reach potting up size before winter arrives, when they will go dormant. This will shorten the time it takes for them to reach maturity and bloom.

Most native grasses are heat lovers, and there is no point starting their seed until the weather has warmed in May. Then they take off. Bartolomei pointed out two grasses in one-gallon pots now in full bloom. The purple lovegrass (Erigrostis spectabilis) was sown at the beginning of June and the purpletop (Tridens flavus) about a month earlier. They were potted up in early August and are ready for planting.

Each gardener’s method is a bit different. I asked Bartolomei and Melzer to show me theirs. The seeds are sown in trays (these should drain) using a seed starting mix typically lightened with vermiculite. They add beneficial fungus for root development.

The seeds need to be kept moist – they are misted automatically about twice an hour. For a makeshift setup at home, you can place a plastic bag over the seeds, but it must open to ventilate once the seeds germinate. Also it should be kept away from direct sunlight to avoid baking the seedlings.

Once the seedlings are growing well – typically a month after sowing – they need to be separated and potted into a plug tray where each infant plant can develop in its own cell. Melzer uses trays that can take between 20 and 70 plants. Transferring from seed tray to plug tray is the most delicate part of the enterprise. At Pope Farm Nursery, volunteers use dental tools to separate and plant the seedlings.

Once the plants bulk up, after several weeks, they are moved to four-inch or larger quart pots. You can, however, plant plug perennials directly into the garden, with proper spacing.

I also travelled to another native plant propagation nursery run by an organisation named Earth Sangha and located in the Franconia section of Fairfax County, Virginia. Here, mother and son team Lisa and Matt Bright and their colleagues grow perennials and woody plants from seed in frames under shade cloth.

At Earth Sangha, seeds that might otherwise be treated in the fridge for several weeks are simply planted in seed trays placed in the sheltered frames. The moisture and cold of winter will set them up for germination when they’re ready.

The black-eyed Susan and other rudbeckias and various goldenrods can be treated this way, Matt Bright said.

I asked Bright to show me some of the woody plants that he propagates from seed – a proposition that requires more patience than with perennials, but not unduly so.

The pawpaws, now 18 inches high, were sown in the fall of 2019. The arrowwood viburnum was sown a year earlier, but is now 24 inches high and fit for planting out. Many of the same nursery catalogues that sell vegetables and annuals also sell perennial seed. One of the major suppliers of seed to professionals and consumers is Jelitto Seed.

Or you can collect seeds from mother plants, though you need permission to take seeds from plants belonging to others, and wild seed collecting is generally prohibited in public parkland.

The seeds must be ripe (not green), and the knack is to grab them just before the plant lets go of them. You have to clean the seeds by screening out the chaff. And some seeds need special techniques for successful germination, including fermenting or scarifying. Jelitto’s catalogue has a key to the germination techniques by species.

But don’t become fixated on the minute. There will be failures, there will be successes, and each sowing will expand your knowledge of seed starting.

“It’s like following a recipe for something,” Bright said. “Not every recipe will work for you. You have to find what works and be unafraid of failure. And take notes because when you do have good results, it’s very helpful to remember how you got there.”