KABUL, AFGHANISTAN (AP) – A month after the Taleban seized power in Afghanistan, the music is going quiet.

The last time the militant group ruled the country, in the late 1990s, it outright banned music. So far this time, the government set up by the Taleban hasn’t taken that step officially. But already, musicians are afraid a ban will come, and some Taleban fighters on the ground have started enforcing rules on their own, harassing musicians and music venues.

Many wedding halls are limiting music at their gatherings. Musicians are afraid to perform. At least one reported that Taleban fighters at one of the many checkpoints around the capital smashed his instrument. Drivers silence their radios whenever they see a Taleban
checkpoint.

In the alleys of Kharabat, a neighbourhood in Kabul’s Old City, families where music is a profession passed through generations are looking for ways to leave the country. The profession was already hit hard by Afghanistan’s foundering economy, along with the coronavirus pandemic, and some families now too fearful to work are selling off furniture to get by.

“The current situation is oppressive,” said Muzafar Bakhsh, a 21-year-old who played in a wedding band. His family had just sold off part of its belongings at Kabul’s new flea market, Chaman-e-Hozari. “We keep selling them… so we don’t die of starvation,” said Bakhsh, whose late grandfather was Ustad Rahim Bakhsh, a famous ustad – or maestro – of Afghan
classical music. 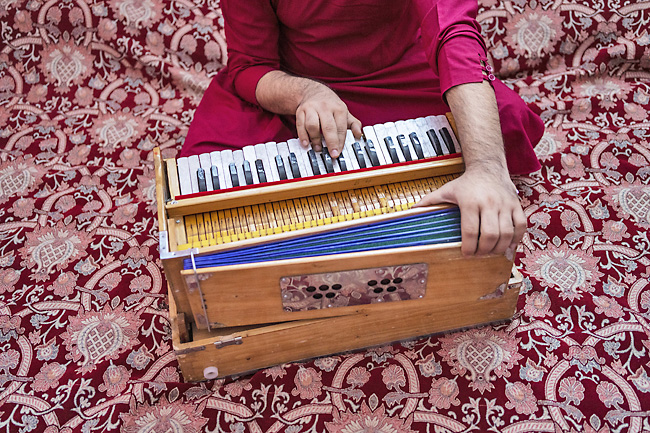 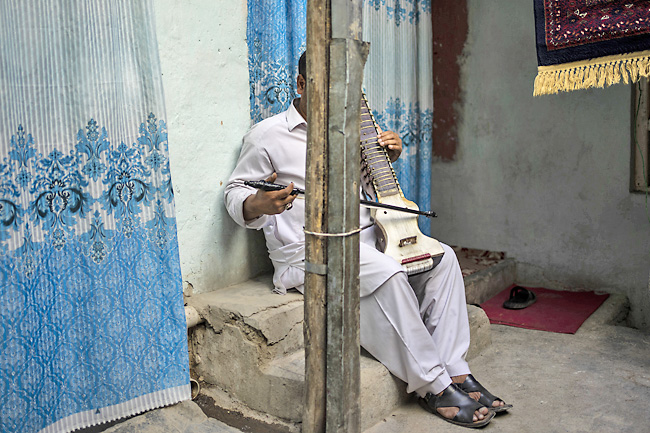 Afghanistan has a strong musical tradition, influenced by Iranian and Indian classical music. It also has a thriving pop music scene, adding electronic instruments and dance beats to more traditional rhythms. Both have flourished in the past 20 years.

Asked whether the Taleban government will ban music again, spokesman Bilal Karimi told The Associated Press, “Right now, it is under review and when a final decision is made, the Islamic Emirate will announce it.” But music venues are already feeling the pressure since the Taleban swept into Kabul on August 15.

Wedding halls are usually scene to large gatherings with music and dancing, most often segregated between men’s and women’s sections. At three halls visited by the AP, staff said the same thing. Taleban fighters often show up, and although so far they haven’t objected to music, their presence is intimidating. Musicians refuse to show up. In the male sections of weddings, the halls no longer have live music or DJs. In the women’s section – where the Taleban fighters have less access – female DJs sometimes still play.

Some karaoke venues have closed. Others still open face harassment. One venue visited by the AP stopped karaoke but stayed open, serving waterpipes and playing recorded music. Last week, Taleban fighters showed up, broke an accordion and tore down signs and stickers referring to music or karaoke. A few days later, they returned and told the customers to leave immediately.

In the family home of another ustad in Kharabat, everyone’s go-bag is packed, ready to leave when they can. In one room, a group of musicians was gathered on a recent day, drinking tea and discussing the situation. They shared photos and videos from their performances around the world – Moscow, Baku, New Delhi, Dubai, New York.

“Musicians do not belong here anymore. We must leave. The love and affection of the last years are gone,” said a drum player, whose career has spanned 35 years and who is the master of a leading music education center in Kabul. Like many other musicians, he spoke on condition he not be named, fearing reprisals from the Taleban.

Another musician in the room said the Taleban broke a keyboard worth USD3,000 when they saw it in his car as he crossed through a checkpoint. Others said they were shipping their most valuable instruments outside the country or hiding them. One had dismantled his tabla – a type of drum – and hidden the parts in different locations. Another buried his rebab, a stringed instrument, in his courtyard. Some said they hid instruments behind false walls.

One who managed to leave is Aryana Sayeed, a top female pop star who was also a judge on the TV talent show The Voice of Afghanistan. Already used to death threats, Sayeed decided to escape the day the Taleban took over Kabul.

“I had to survive and be the voice for other women in Afghanistan,” said Sayeed, now in Istanbul. She said she was asking Turkish authorities to help other musicians get out of her homeland. “The Taleban are not friends of Afghanistan, they are our enemies. Only enemies would want to destroy your history and your music,” she said.

At the Afghanistan National Institute of Music, most of the classrooms are empty. None of the teachers nor the 350 students have come back since the takeover.

The institute was once famous for its inclusiveness and emerged as the face of a new Afghanistan. Now, it is guarded by fighters from the Haqqani network, an ally of the Taleban.

Dusty pianos rest inside locked rooms, and some instruments have been stacked in a container on the school’s patio. The fighters guarding the site said they were waiting for orders from the leadership on what to do with them. “We’re not interested in listening to these things,” one fighter said.