THE WASHINGTON POST – Every day we tell many small untruths, lies uttered by mutual consent that keep societal interactions civil.

We say “How are you today?” when we don’t really care to know, or “That was a lovely dinner” when the meal tasted terrible. Parents reproach their children for failing to supply a polite answer instead of the real one.

Then there are the lies we tell ourselves. Researchers have found that patients with an optimistic outlook in the face of a terminal medical prognosis will outlive those with a realistic sense of their disease.

“If you think of benevolent deception and optimistic self-deception not as vice and weakness, but as adaptive responses to difficult circumstances,” Shankar Vedantam wrote in his powerful new book, Useful Delusions: The Power & Paradox of the Self-Deceiving Brain, “it is not hard to imagine that many of us – confronted by immense pain – might choose the hope of lies over the despair of truth”.

Useful Delusions is co-written by science writer Bill Mesler but presented in Vedantam’s voice. There’s something about the latter’s spoken voice that’s both soothing and authoritative. It could be his cadence and pitch. It could be that he sounds like the world’s nicest guy. 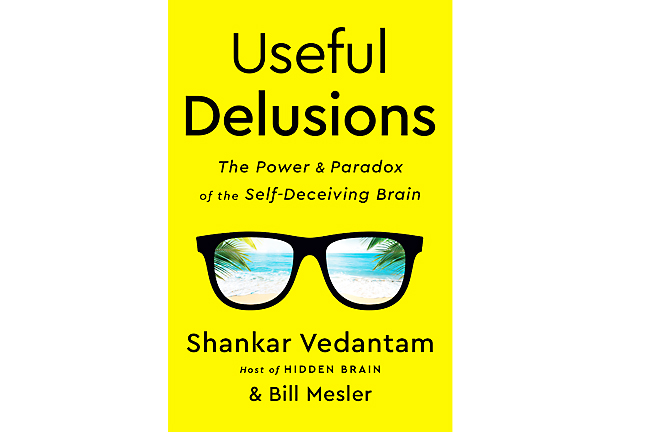 Whatever it is, when Vedantam tells stories on his podcast and radio show, Hidden Brain, even when he’s imparting highly disturbing truths about human behaviour, he’s a joy to listen to.

It would seem difficult to duplicate that effect with the written word, but he manages to do just that. He explains the phenomenon of deceit in general, and self-deception in particular, with the same plain language and gentle authority that his listeners have come to rely on.

An intriguing area of self-deception involves the relationship between what we pay for something and how we judge it.

The second part of the book is devoted to a story that illuminates the deep human need for companionship.

The book’s third section looks at consensual delusions on a grand scale. Through the ages, stories and myths have propelled mass movements and revolutions, and fuelled what researchers call “sacred causes”. Stories about wrongs that need to be redressed give people the feeling they are devoting their lives to something larger than themselves.

Speaking of individual delusions that carry over to the masses, it would be interesting to hear what Vedantam has learned about the millions of people who came to believe that the 2020 presidential election was stolen, that it was possible to overturn the results by storming the United States Capitol and that President Donald Trump would be marching down Pennsylvania Avenue along with the rest of the deluded mob.

Let’s hope for a Hidden Brain episode soon about what was going on in people’s heads.