Clear skies across the Sultanate afforded sky-gazers the beautiful double treat of a total lunar eclipse and supermoon yesterday.

The Astronomical Society of Brunei Darussalam (PABD) held an observation event in front of Kompleks Perniagaan Bumiputera in Temburong District, joined by members of the public keen on catching a glimpse of the first total lunar eclipse since the last one was experienced here in July 2018.

Some 100 astronomy enthusiasts and the public observed the rare phenomenon from along the waterfront, with the use of telescopes and binoculars provided by PABD. They also participated in an online quiz competition on the eclipse phenomenon.

This lunar eclipse coincided with the moon being at its closest (perigee) to Earth, hence named a supermoon. It was the total eclipse of the biggest full moon of the year. 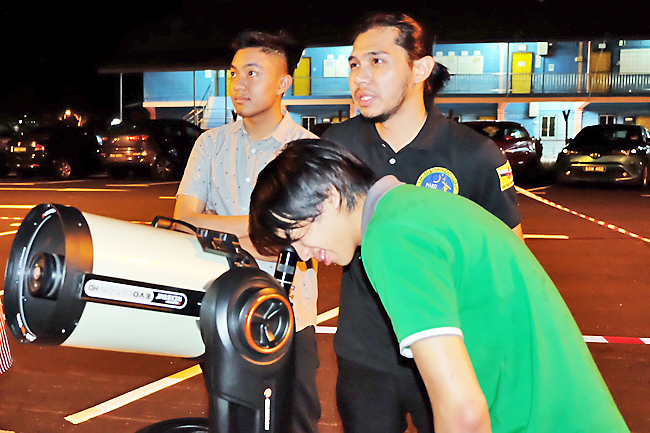 The highlight of the event was the total eclipse of the supermoon at 7.11pm, when the moon passed directly behind the Earth, and was positioned in the Earth’s dark shadow, known as the Umbra. The moon appeared reddish in colour during this period, and 14 per cent larger than normal. This rare phenomenon lasted 14 minutes and 30 seconds.

The event was a joint collaboration between the Temburong District Office, Ministry of Home Affairs (MoHA) and Kolej International Graduate Studies (KIGS) Astronomy Club, with support from the Temburong Survey Section, Ministry of Development.

Meanwhile, special prayers were held at mosques, suraus and religious halls nationwide to mark the occasion.

The sermon discussed how the eclipse depicted Allah the Almighty’s supremacy and greatness. Prophet Muhammad (pbuh) urged Ummah to carry out good deeds including reciting Doa, Zikir, praying, giving alms, performing Takbir and Istighfar during eclipses. The sermon also touched on the need for Ummah to repent, perform pious act and to avoid wrong doings.