Skillet chicken casserole with broccoli is a weeknight dinner win

THE WASHINGTON POST – Pan-cooked chicken with sides of quinoa and broccoli make for a perfectly serviceable, if ho-hum, dinner on a busy weeknight. But take those same basic ingredients, marry them in a creamy, rosemary-infused parmesan sauce and bake them into one big, comforting casserole, and you have a dish that really revs some excitement. That’s what’s happening with this recipe, which is an even bigger win because it all happens in a single skillet.

You start by browning the chicken – in batches, so it gets nice, golden colour in spots. (I prefer chicken thigh here because it retains its moist, tender texture once baked, but chicken breast works fine too, if you don’t mind it being a bit drier).

Then remove the chicken from the pan to make the sauce: Sauté onion and celery, bloom garlic and rosemary, then sprinkle with flour, add milk and broth, and simmer until a thick and creamy slurry forms. Finally, stir in lemon zest and parmesan cheese. (You could substitute two teaspoons cornstarch to make the dish gluten-free, and sub almond or oat milk for the dairy milk).

The quinoa gets stirred into this lovely, light pan sauce, then the chicken and broccoli are nestled in, and it goes into the oven, covered for a while so all the ingredients cook through, then uncovered so a finishing sprinkle of cheese can brown a bit on top.

The result is a gorgeous skillet casserole of tender quinoa cooked in a creamy parmesan sauce, wafting of rosemary and lemon zest, studded with juicy chunks of chicken and tender-crisp broccoli – an outstanding, nourishing meal that’s totally doable on a typical weeknight. 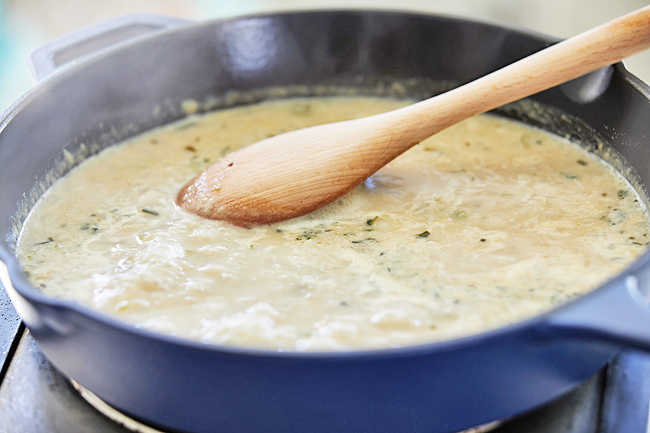 In this big, comforting skillet casserole, toothsome quinoa, juicy chunks of chicken and tender-crisp broccoli are married in a rosemary-infused, creamy parmesan sauce. It’s an \ extraordinary, nourishing meal that comes together in one pan, making it ideal weeknight fare.

Storage: Refrigerate leftovers for up to three days.

Position a rack in the middle of the oven and preheat to 400 degrees.

Sprinkle the chicken with half teaspoon of the salt and the pepper. In a large ovenproof skillet over medium-high heat, heat two tablespoons of the oil until shimmering. Add half the chicken and cook, stirring once or twice, until the meat is browned on both sides, three to four minutes total, then transfer to a plate.

Add one more tablespoon of the oil to the skillet and repeat with the remaining chicken.

While stirring constantly, add the broth and milk to the skillet, increase the heat to medium-high and bring the mixture to a boil. Reduce the heat to medium-low and simmer, stirring occasionally, scraping up any browned bits in the pan, until the liquid is reduced by about a third and has thickened to the texture of cream, six to eight minutes.

Remove the pan from the heat, and stir in the lemon zest and a quarter cup of the parmesan cheese. Then stir in the quinoa and any accumulated juices from the plate of chicken.

In a medium bowl, toss the broccoli with the remaining one tablespoon of oil. Add the chicken and the broccoli to the skillet, nestling them into the quinoa mixture (not stirring them in).

Cover the pan tightly with foil and bake for 30 to 35 minutes, or until the chicken is cooked through, the quinoa is tender and most of the liquid has been absorbed. Remove the foil, sprinkle the remaining a quarter cup of parmesan cheese on top and bake, uncovered, for another five minutes, or until the cheese is melted and the top has browned slightly. Let stand for five minutes before serving.

NOTE: If you don’t have an ovenproof skillet, use whatever skillet you’ve got up through stirring in the quinoa. Then, transfer the mixture to a shallow three-quart baking dish and bake as instructed above.