Two men, aged 27 and 32, were apprehended for possessing 18 cartons, 12 packets and 21 sticks of cigarettes during a raid along Jalan Batu Bersurat on November 14.

On the same day, enforcement personnel detained two locals, aged 23 and 29, during a raid at a parking lot of a complex building.

A total of 111 cartons, seven packets and 17 sticks of cigarettes as well as a bottle of alcohol were found during the raid. Enforcement personnel also found a car and cash amounting to BND1,385, believed to be proceeds from the sale of the contraband items.

On November 15, the RCED team apprehended two local men and two local women, aged between 32 and 41, during an operation at RPN Kampong Lugu. The suspects were found in possession of six cartons and 10 packets of cigarettes as well as one bottle of alcohol. 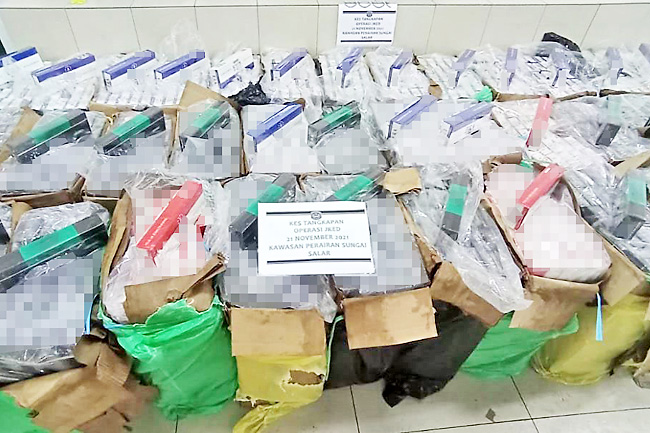 Also found were 889 various types of vapes, 236 bottles of vape juices, 259 pieces of several vaping accessories, and illegal cosmetics, beauty and health products and food items believed to have been smuggled into the country.

On November 20, the RCED team apprehended a 38-year-old foreign man believed to be in possession of nine cartons and 17 packets of cigarettes during an inspection at the RPN Kampong Bukit Beruang.

On the same day, five foreign men aged between 22 and 46 were rounded up at a staff house in Kampong Menglait for possessing 94 cartons, 22 packets and 51 sticks of cigarettes and cash amounting to BND1,663.

The raiding team then headed to Brunei waters and apprehended a Malaysian man believed to be in possession of 1,800 cartons of cigarettes. The team also confiscated a 23-feet long boat along with a 150hp engine.

All contraband items were confiscated and apprehended individuals were taken to the customs enforcement office for further investigation.

The RCED reminded the public that possessing contraband items is an offence under Section 146 of the Excise Order 2006, and urged the public to observe the country’s law and regulations.

The public can share information involving smuggling of contrabands by calling the department on its main line 8714422 / 8721422 or visit the nearest customs office.