A bird singing and persona contest as well as a Betta Fish Competition at the Lugu Light Industrial Park yesterday drew hundreds of bird and fighting fish enthusiasts showcasing their pets, and vying for top spots in various categories.

Jointly organised by Kamaluddin, Faidzal and Zainal Family, the bird singing and persona competition was divided into six categories. The birds were placed in ornate bamboo cages covered with bright, colourful fabric. When they were ready to sing, the cages were lifted onto hooks and raised high into the air.

The judges gave each bird a set time to impress them and awarded points based on their melody and overall persona.

For the Black Headed Stone Magpie category, Jess won and received a BND500 with a certificate and trophy.

Meanwhile, the Lovebird, Mix and Burung Suit Mata Putih and Canary categories were won by Kusnadi, Talip and an unnamed winner.

Meanwhile, the Betta Fish Competition saw over 300 participants from 8am to late afternoon. Mohd Azrin bin Haji Jafarudin from Asethetic Betta Community was crowned the champion. 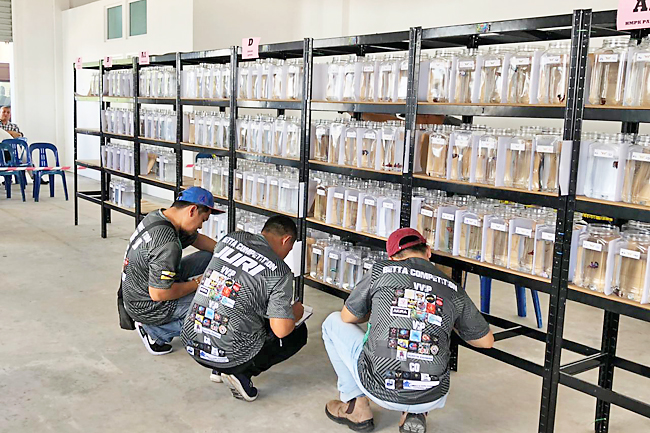