Singaporean wanted by US over North Korea under investigation in city-state: Police

SINGAPORE (AFP) – A Singaporean businessman wanted by the United States (US) for violating sanctions on North Korea is currently in the city-state where he is under investigation, the Singapore police said.

In a statement yesterday, the Singapore Police Force (SPF) said they have sought clarification from their US counterparts over the reward as they have kept them informed about the ongoing probe by local authorities.

The US State Department offered USD5 million for information on businessman Kwek Kee Seng, blaming him for numerous fuel deliveries to North Korea and ship-to-ship transfers as well as money laundering through front companies on Thursday.

Federal prosecutors in New York issued an arrest warrant for Kwek in 2021, a year after one of his oil tankers, the M/T Courageous, was seized by Cambodia on a US request over purported sanctions violations.

The State Department’s Rewards for Justice programme had said his exact location was not known and that he has also been identified as being in North Korea, Cambodia, Taiwan and Thailand as well as Cameroon and the tiny Caribbean nation of Saint Kitts and Nevis. 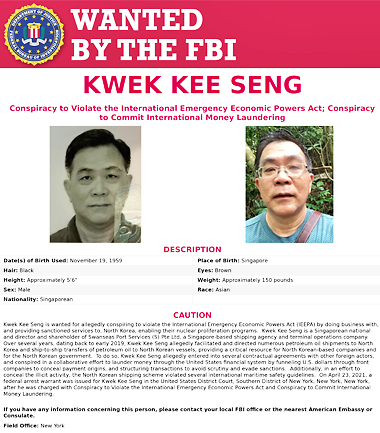 But Singapore’s police said in their statement that “Kwek is presently in Singapore”.

He has been under investigation since April last year by the Commercial Affairs Department – the city’s white-collar crime investigation agency – and his passport has been impounded.

The Singapore police said the investigation was launched after the US Justice Department announced a criminal complaint had been filed against Kwek for “allegedly conspiring to evade economic sanctions” on North Korea and for money laundering.

Police added that they have shared information about their investigation of Kwek with US law enforcement authorities.

“Since then, there were several more exchanges. Due to the nature and complexity of the case, investigations are still ongoing,” police said.

“Singapore will continue to assist the US authorities within the ambit of our laws and international obligations.”