SINGAPORE (AFP) – Singaporean Sue-Anne Chng used to wear a different outfit on all 15 days of the Lunar New Year, when it is customary to don new clothes to symbolise a fresh start.

But this year she will wear second-hand items exchanged for her old clothes at a store catering to people concerned about the impact of fast fashion on the environment.

Several swapping initiatives, from permanent shops to pop-up events, have appeared in the affluent city-state in a bid to encourage consumers to make the most of what is already in their closets. The fashion industry is responsible for global carbon emissions, according to the United Nations’ (UN) environment programme.

Clothes cause emissions in a wide variety of ways – from their manufacture to transportation and washing by the consumer. On a recent trip to her favourite store, The Fashion Pulpit, Chng took along several dresses and a matching blouse and skirt, which a staff member assessed before crediting points to her account.

She spent her points on 17 items, including a yellow and green dress to wear for the first day of the new year as it looked like “an auspicious pineapple”. The fruit, seen as a symbol of prosperity, is typically given as a gift or displayed during Lunar New Year in Singapore. 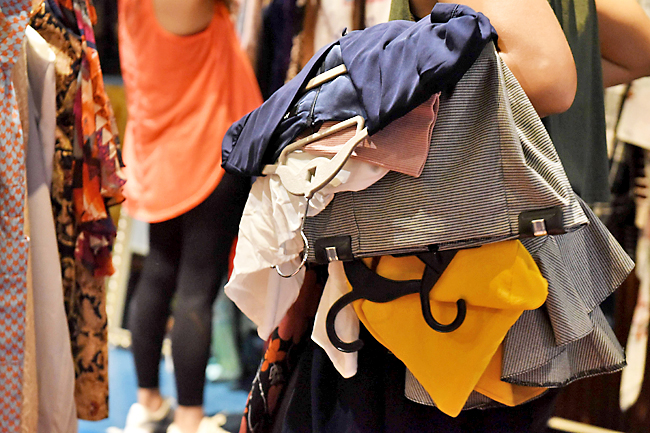 “I’ve always been brought up by my parents to have a new set of clothes every Chinese New Year, and I fell into that behaviour of consumerism,” the 35-year-old told AFP.

“In the past I probably made sure I have 15 days of outfits even if I’m not visiting (relatives), which is too much.” But now, “as long as the item is new to me, I think it’s good enough,” added Chng, who works for a tech company and is married. Chng first learnt about clothes swapping at a work event five years ago, and decided to change her ways after realising her wardrobe was filled with unworn items.

“Prior to switching over to swapping, my consumption habit was insane,” she said. “I realised I had more than 50 per cent of my wardrobe unworn, but I still felt like I didn’t have anything to wear.”

She pays SGD599 for a yearly membership at The Fashion Pulpit, which allows her unlimited swaps and visits – about 80 per cent of her wardrobe is now from the shop.

Tiny Singapore alone produced 168,000 tonnes of textile and leather waste in 2019, according to authorities – the weight of more than 400 Boeing 747 planes. Filipino clothes designer Raye Padit founded The Fashion Pulpit nearly three years ago after learning about his industry’s impact on the environment and poor treatment of garment workers.

“In Singapore, the problem is overconsumption and waste,” he told AFP. “We want to provide a platform where you can still dress up, express yourself… through clothes. But at the same time, it’s not damaging to the planet and to your wallet.” His company now has more than 1,500 members and has started turning a profit. It also holds workshops where customers can learn how to mend or upcycle used clothes. People have swapped everything from casual clothes made by high-street brands to top-end items such as Prada bags and Louboutin shoes, Padit said.

One-time swap events are also popping up in the city-state while a group of volunteers host monthly swap gatherings. “When I join a clothing swap it reminds me to consume consciously because when I give away clothes, I think about whether I’m still wearing them,” said Nadia Kishlan, a 30-year-old participant at one clothing swap.

Challenges remain in persuading Singaporeans to swap rather than shop, however, and the city’s industry is still in its infancy. Second-hand shops are not as popular in Asia as in the West, in part because many believe used clothes from strangers could bring bad luck, or be unhygienic.

But Padit said attitudes in Singapore were changing, driven by rising environmental awareness and a wave of trendy new thrift shops marketing their goods on social media. “It’s slowly changing the perception of what second hand is all about”, he said. “It’s no longer dirty, it’s no longer dusty – it’s a cool thing.”