Singaporean Minister for Sustainability and the Environment Grace Fu, along with her delegation members, paid a working visit to the Ulu Temburong National Park and Barramundi Asia (B) Sdn Bhd in Kampong Serasa yesterday.

Minister of Primary Resources and Tourism Dato Seri Setia Dr Haji Abdul Manaf bin Haji Metussin welcomed the visiting delegation. The visit began with a trip downriver via longboat to the Ulu Temburong National Park followed by a walk through the forest trail to climb the canopy walkway for a panoramic view of the tropical rainforest.

Fu also received a briefing on the upgrade, operations and maintenance of the accommodation complex of the park from a representative of the project – Sundaland Resorts Pte Ltd – a foreign direct investment company from Singapore.

The Singaporean minister also visited Barramundi Asia (B) to take a closer look at the facility, including the hatchery and recirculating aquaculture system (RAS) and its diagnostic and laboratory services.

Barramundi Asia (B) farms lates calcarifer fish at sea and on land, and has a workforce of 29 people.

Barramundi Asia (B) began exporting the fish to Singapore in September. 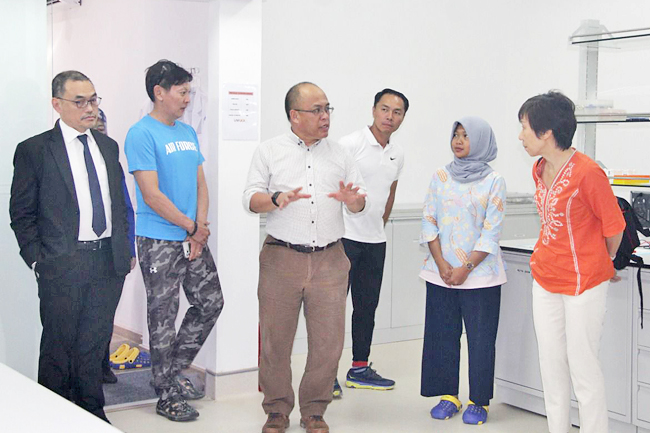