SINGAPORE (AFP) – Singapore authorities have made their biggest ever seizure of rhino horn with a USD830,000 haul confiscated from a smuggler arriving from South Africa, officials said yesterday.

The city-state’s National Parks Board said 20 pieces of horn weighing a total of 34 kilogrammes were discovered on Tuesday in two bags at Singapore Changi Airport.

The contraband was detected by sniffer dogs and belonged to a passenger travelling onward to Laos, the board said, adding that the suspect had been arrested.

“This is the largest seizure of rhinoceros horns in Singapore to date,” it said in a statement.

Rhinos are protected under the Convention on International Trade in Endangered Species of Wild Fauna and Flora (CITES) and international trade in their horns is prohibited.

The board said genetic testing is being carried out on the seized horns to identify the species, after which they will be destroyed to prevent them from re-entering the market.

Rhino horns are considered status symbols and believed to have medicinal properties in parts of Asia. They are also carved into jewellery and household items including combs, buttons and belt buckles.

The Switzerland-based International Union for Conservation of Nature (IUCN) said in August that poaching and the illegal trade in horns have decreased in recent years but remain grave threats to rhinos.

It said more than 2,700 rhinos were poached in Africa between 2018 and 2021, of which 90 per cent were killed in South Africa, mainly in the Kruger National Park.

South Africa is home to nearly 80 per cent of the world’s rhinos. 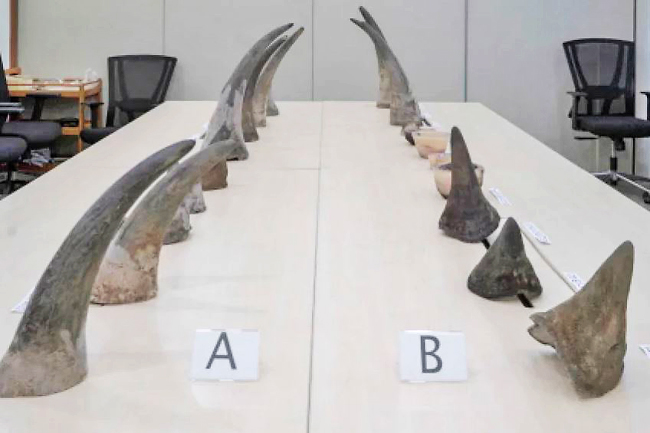