ANN/PHNOM PENH POST – A man with fair skin holds a sword in each hand and speaks slowly.

At first glance, people might think he is a samurai gangster or a street fighter, but he is actually a blacksmith named Ron Nopann, a 30-year-old living in Roluos commune of Siem Reap province’s Prasat Bakong district.

As he works the air pump to make the flames go higher in the forge he uses to soften steel to be able to hammer it into a sword, knife or any other design requested, Nopann said he considers blacksmithing to be an art form. Nopann said he learnt this skill from his grandfather who was also a blacksmith, making knives, axes or other metal tools.

He recalled that when he was about 10 years old he lived with his grandfather, studying only half a day at school and the remaining half of the day he would come home to help work the pumps on the forge for his grandfather.

While living with his grandfather he was taught blacksmith skills, which he eventually mastered and continues to use today. 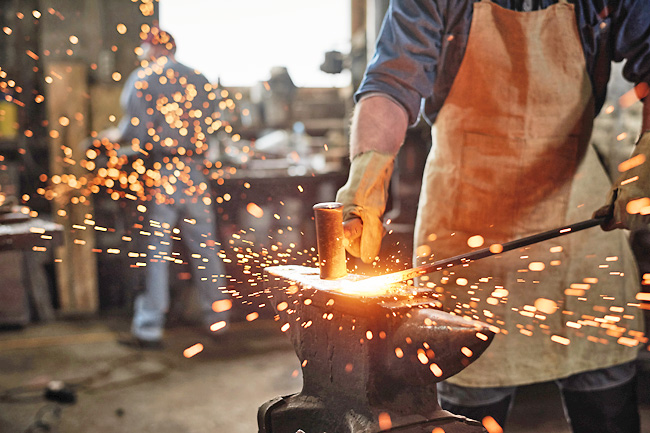 According to Nopann, forging steel into knives, swords, spears or other objects is not only a matter of counting hammer blows and following the rules, it also requires a lot of patience and attention to detail.

It also requires a great deal of strength and endurance because the smith has to be able to stand the heat and swing a heavy hammer over and over again to shape the metal and one must follow the correct practices or risk hurting themselves otherwise.

He confirmed that not just anyone was allowed to wield all of these eight types of swords.

They were used depending on the person’s height, weight and status.

Thus, before he makes a sword he needs to know the customer’s weight, height and age if they want to order from him.

However, his weapons are not intended for use by harming others or committing crimes, they were made for display only, but he wants to preserve the heritage of his ancestors so he follows the old practices, hopeful that they will be carried on by the younger generations.