NARAYANPUR, INDIA (AP) – The motorbike roared as it strained to carry the ambulance sidecar up a steep river bank. The bike’s rear tyre whirred in place, kicking up water and mud while the sidecar – a hospital bed on wheels, under a white canvas canopy – lolled dangerously.

Two health workers, who had been following on foot, tried pushing it, but it didn’t budge.

Eventually, the three gave up and settled for digging a new path.

After 40 minutes of digging and a push to lift the vehicle from the river bed onto the muddy path, the team was on its way again. The bike ambulance resumed its nine-mile trek across the forest known as Abhujmarh, or “the Unknown Hills”, to reach 23-year-old Phagni Poyam, nine months pregnant in the isolated village of Kodoli.

When the team arrived, Poyam was waiting next to her sleeping one-year-old boy, Dilesh.

Like many babies in Kolodi, Dilesh wasn’t born in a hospital, both because of the distance, and distrust of authorities. But in recent years, Poyam said, she has seen women or their babies dying during childbirth and she doesn’t want to take any chances.

“My baby will be safer,” she said in Gondi, a language spoken by an estimated 13 million members of the Indigenous Gond community. 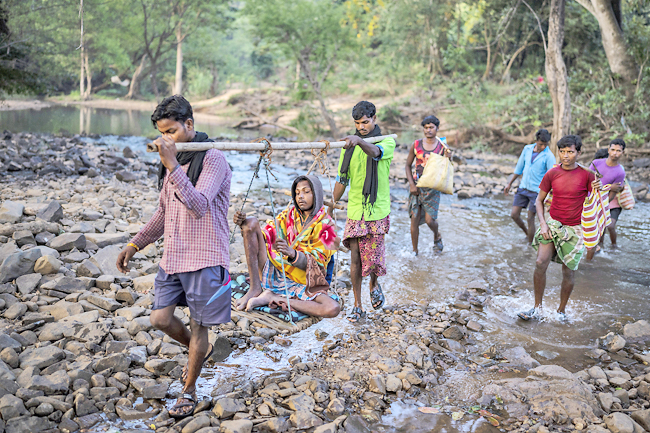 Motorbike ambulances are helping mothers give birth in Naryanpur district, in central India’s Chhattisgarh state. The heavily forested district is one of India’s most sparsely populated, with about 139,820 inhabitants spread over an area larger than Delaware. Many local villages, like Kodoli, are 16 kilometres or more from motorable roads. The state has one of the highest rates of pregnancy-related deaths for mothers in India, about 1.5 times the national average, with 137 pregnancy-related deaths for mothers per 100,000 births.

While authorities and health workers agree that bike ambulances don’t offer a long-term solution, they are making a difference.

The state’s health system has struggled to reach remote villages. Residents of Kodoli usually walk the 20 kilometres to Orchha, the nearest market town. It takes about two and a half hours. The lack of roads often forces villagers to resort to makeshift palanquins to transport the very sick.

Although the government has been trying to build a road network, road works are often targetted by armed rebels, who’ve been operating in the region for four decades. The rebels said their fight is for the rights of Indigenous communities, who make up 80 per cent of Chhattisgarh state’s population.

Bike ambulances were first deployed in Narayanpur in 2014. Today, there are 13 bike ambulances operating in three districts of Chhattisgarh, run-by local authorities and a nonprofit called Saathi with the support of United Nations International Children’s Emergency Fund (UNICEF). The idea stemmed from a similar project in Ghana, said Bhupesh Tiwari of Saathi. The ambulances focus on bringing mothers to and from the hospital, but have also been called to transport victims of snake bites and other emergencies.

Since 2014, the number of babies born in hospitals in Narayanpur district has doubled to a yearly average of about 162 births each year, from just 76 in 2014. The bike ambulances have helped nearly 3,000 mothers and their babies in the 99 scattered villages of Narayanpur district.

Once Poyam and her son were safely aboard, the motorbike ambulance retraced its route back to Orccha, taking Poyam to an early referral centre close to the hospital where expectant mothers can stay under observation and see doctors. Mother and son had to disembark a few times while the motorbike ambulance negotiated a tricky slope or a rocky river bed. Sometimes, the driver, Sukhram Vadde, 24, had to lift large stones that threatened to jam under the carriage.

By the time they reached Orccha, it was dark. Lata Netam, the health worker in charge of the centre, had called ahead when they left from Poyam’s village to ensure dinner was ready. One-year-old Dilesh gurgled happily, playing with others who work there, while Netam answered questions from Poyam: “What will the doctor ask me? Do I need documents? Can my husband come to visit me?”

“We are from here. We know these villages. We want mothers to feel like they have not left home,” she said.

Trust in hospitals and modern medicine is growing. In the villages, there are mothers who speak glowingly of the hospital. In the weekly market at Orccha, where hundreds gather from far-flung villages to buy basics, government health workers are busy screening people for diseases like diabetes and malaria.

Blood tests revealed that Poyam’s iron levels were dangerously low, likely because of a poor diet. This can lead to complications, like excessive bleeding while giving birth, so doctors prescribed supplements to help her.

Dilesh also tested positive for malaria. He immediately was hospitalised and treated for the virus, which kills thousands of children every year.