Should you be brushing your dog’s teeth?

THE WASHINGTON POST – I’ve had seven dogs over the course of my life, including my current dog Annie, and I’ve never brushed their teeth. I may have even made rude comments to friends and colleagues who do brush their dogs’ teeth.

I now apologise for these comments. But to be fair, I’m not alone in thinking, “What?! Are you kidding? Brush a dog’s teeth?”

Pet dental care is a relatively new field, and the notion of home care even newer. President of the American Veterinary Medical Association Lori Teller said veterinarians began regularly incorporating pet dental care into their work about 30 years ago.

“As we learned more about dental care in our dogs and cats, it became more obvious that brushing teeth makes a difference,” Teller said.

Research shows that regular brushing works with dogs and cats the same way it does with people. It helps prevent gum disease, which can have terrible consequences. The bacteria that infect the gums can find their way into the bloodstream, and from there, reach other organs damaging the heart, liver and kidneys, shortening a dog’s life.

Most humans don’t bite the hand that cleans their teeth, but it is difficult to explain periodontal disease, even to notoriously smart border collies. Cleaning and other procedures at the vet not only cost but also require that a pet be anesthetised. “The single best way to avoid having a dental procedure at your veterinarian’s office is to brush your pet’s teeth on a daily basis,” said Teller. 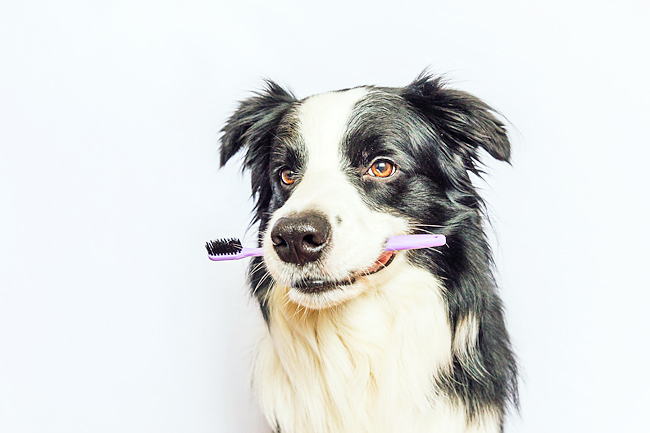 And yet, most dog and cat owners are not on board. A Canadian marketing survey from 2016 showed seven per cent of dog owners brushing their dogs’ teeth daily. Only four per cent of Swedish dog owners brush their dogs’ teeth daily, according to peer reviewed research. Although Teller wasn’t aware of a United States (US) study that provided hard data, she did say that most pet owners don’t brush their companion’s teeth. Some said they will never do so.

Veterinarian at the Swedish University of Agricultural Sciences in Uppsala Karolina Enlund, who specialises in canine dental health, thought it would be worth finding out what is going on in the minds of dog owners like me, except Swedish, so she and her colleagues surveyed them about their attitudes and beliefs on dog dental health.

The results included a comment from my Swedish alter ego saying, “Wolves do not brush their teeth.” And, what about the millions of street dogs that get along without any dental care whatsoever?

True, Enlund agreed, neither wolves nor street dogs have access to dental care, but that doesn’t mean their teeth are fine. “It’s really common in wild animals to get dental problems,” she said. And often wild animals just don’t live long enough to have some of the problems our pets encounter.

Enlund found that the biggest misconceptions of dog owners were that diet and chewing on bones helped dental health. She said there just isn’t good information on the effect of diet. People make various claims, but she said rigorous studies are lacking.

Bones, she said, can harm dogs’ teeth if they are too hard. Some dog chews and toys promote dental health, she said. Both Teller and Enlund recommend this guide to dog chews and dental products from the Veterinary Oral Health Council.

Enlund said that while tooth brushing improves dental health for dogs, there are differences in breeds, with smaller dogs having worse tooth problems than larger breeds. And she said some dogs were just lucky to have no tooth problems. “So I understand those dog owners that don’t see the point,” she said. “Why should I brush?”

Our last dog was one of these – Sophie, a Labrador retriever-English setter cross, may she hunt woodchucks to her heart’s content in some suburban afterlife. Every year, our vet would marvel at the perfect condition of her completely untended teeth.

Having established that dog tooth brushing is a good thing, I called a few animal people I have interviewed over the years, curious about their habits. I asked them, “Do you brush your dog’s teeth?”

Dog cognition scientist at Barnard College and author of several books on the nature of dogs, including the recent The Year of the Puppy Alexandra Horowitz said she has brushed her dog’s teeth. “But I don’t do it as regularly as I should,” she said. I was so happy to hear this, since that seemed like a level of dog dental care I might be able to reach.

Lori Gruen is a philosopher at Wesleyan University, champion of chimpanzees and writer on animal ethics, most recently Animal Crisis: A New Critical Theory. She said she has a daily routine with her three rescue dogs involving wipes and brushless gels as well as brushing. Taz, a greyhound rescue, has bad teeth and needs the brushing. Eli, a mini-Australian shepherd, has bad teeth but only occasionally allows brushing. And Zinnie, a German shepherd-great Pyrenees mix, “has great teeth but wants me to brush hers, too, so she isn’t left out”. This kind of variation in dog response is something to be aware of. Your dog may love the brushing. Or not.

Psychologist who studies dog behaviour at Arizona State University and author of Dog is Love Clive Wynne said he doesn’t brush his dog Zephos’ teeth because her breath is fine, so he doesn’t detect any problem. I have met and been licked by Zephos, and I can also say she does not have bad breath.

If you do want to brush your dog’s teeth, the next question is how? First, get only toothpaste and a brush designed for pets. Fluoride is not good for dogs, and they don’t spit.

Some brushes fit over your finger. Experts suggest letting the dog smell and taste the toothpaste at first. After a while, introduce the brush. And reward dogs with treats if they allow you to brush their teeth.

I have now started to brush Annie’s teeth. I’ve let her taste the toothpaste and kind of poked one of the finger brushes into her mouth. I guessed you could say I’ve brushed a tooth or two. So far, she thinks it’s fun.

Oh, and if you are wondering about cats, yes, you should brush your cat’s teeth, although Teller recognises that cats are not dogs. “In the ideal world, people would brush their cat’s teeth as well,” she said, but added, “We certainly recognise that that can be a challenge.”