DOHA, QATAR (AP) – It’s a rare moment in the Middle East when the public’s voice roars louder than those of the governments. But Morocco’s surprise string of wins at the World Cup in Qatar have stirred a joy and pride among Arab fans that have, at least for a moment, eclipsed the region’s many political divisions.

Perhaps most striking is the love fest between Palestinians and the Moroccan team.

The Moroccan team waved a Palestinian flag after its victory over Spain last week, thrilling Palestinians. Throughout the tournament, the Palestinian flag has been unfurled all over, carried by Arab fans and some non-Arabs – so much so that the running joke is that Palestine is the 33rd team at the World Cup.

Palestinians see it as a sign Arab public support still runs strong for their cause even as they feel Arab governments have abandoned them.

“I didn’t expect this. It’s spreading the word and showing that Palestine is not just a political issue, it’s a human issue,” said a young Palestinian in Doha Ahmed Sabri after watching Morocco’s win over Portugal on Saturday. He had the Palestinian flag draped over his back. 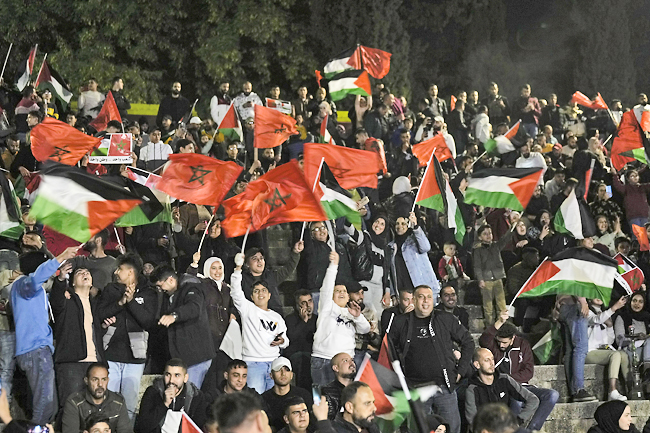 Morocco is the first Arab and African team to make it this far in a World Cup, playing a semi-final tomorrow against France. Part of the Arab embrace of the team has come simply from having something to celebrate in a region where many countries are mired in economic crises, armed conflicts and political repression.

For some, it’s gratifying to see their culture displayed in a positive way on a massive international stage – whether it’s the Moroccan team doing a quick Muslim prayer during huddles or Morocco winger Soufiane Boufal dancing with his veiled mother on the pitch after the quarterfinal victory over Portugal.

“We are all clinging to this Moroccan team as some sort of source of hope and happiness in a time where I think we all could really use some good news,” said Lebanese-American music writer Danny Hajjar.

The excitement with each victory has crossed boundaries and political divisions.

Algerians joined in, even though their government cut ties with Morocco last year. The two countries have a long-running conflict over Western Sahara, which Morocco annexed in 1975 and where Algeria long supported Sahrawis in the Polisario Front seeking independence. Algeria was angered by the United States (US) recognition of Moroccan sovereignty in the territory.

At Morocco and Algeria’s often tense border, fans lined up on both sides and cheered to each other across no-man’s land, videos on social media showed. In the French city of Nice, diaspora Algerians and Tunisians joined Moroccans in cafes and in each others’ homes for the matches, setting off fireworks in celebration on the famed Mediterranean boardwalk Promenade des Anglais.

In contrast, Algerian state TV has not even reported on Morocco’s wins, leaving them out of daily World Cup reports.

For Palestinians, the games have been a breath of fresh air. The peace process with Israel has long mouldered in a jar on the shelf; a far-right government in Israel is poised to take office; tensions have risen in recent months.

At the same time, many Palestinians feel they have been forgotten by Arab governments; besides the Abraham Accords, countries like Egypt and Jordan have largely gone silent on the Palestinians’ future.

World Cup host Qatar has been a vocal supporter of Palestinians and a major economic lifeline for the Gaza Strip, governed by the Hamas militant group and under Egyptian and Israeli closure for years.

Football coach Ahmed Abu Suleiman from the Shati refugee camp in Gaza City said he feels proud seeing the Palestinian flag so much among fans in Doha.

Thousands of people packed a Gaza City sporting hall with a large screen donated by Qatar to watch the Morocco-Portugal match. Many held posters showing the Palestinian and Morocco flags and the slogan, “One People, One Country”.

“It’s an indescribable feeling. I swear it’s as if it’s Palestinians that were playing,” said one fan, Ibrahim al-Lilli. “All of us are Morocco.”

Scenes of jubilation also took place across the West Bank after the win. In east Jerusalem, two men stood atop the Old City’s Damascus gate holding a red Moroccan flag while hundreds below cheered.

On social media, some said Arab enthusiasm for Morocco erases the large ethnic Berber population that is equally if not more a part of the country’s identity. Other voices said Morocco’s hold on Western Sahara and discrimination felt by many Sahrawis were lost in the cheers.

Lebanon may be the most complicated, as sectarian divisions seep into football loyalties. While Lebanese are overwhelmingly Brazil or Germany fans, many have adopted Morocco and rejoiced in the streets after the win over Portugal.

The semifinal with France is more divisive. Much of the Arab world sees a chance for a former colony to give its one-time coloniser its comeuppance. But some in Lebanon feel cultural affinity with France.

After the Portugal game, scuffles broke out in Beirut after a group of Morocco fans rode on motorcycles, some hoisting Palestinian flags. They were accosted by a group of men from the area who saw the convoy as a sectarian provocation.

Given the history of divisions and the 15-year civil war, the music writer Hajjar said he wouldn’t be surprised if there was more street friction around the semi-final. But, he said, he was “hoping that we can all just enjoy the match for what it will be”.