COLOMBO, SRI LANKA (AP) – Miraj Madushanka never thought he’d need government rations to ensure his family could eat two meals a day, but Sri Lanka’s economic crisis, the worst in its history, has recast his life and those of many others in its burgeoning middle class.

Families that never had to think twice about fuel or food are struggling to manage three meals a day, cutting back on portions. Days are spent waiting in lines to buy scarce fuel. The crisis has derailed years of progress toward relatively comfortable lifestyles aspired to across South Asia.

An island nation of 22 million, Sri Lanka is hurtling towards bankruptcy after amassing USD51 billion in foreign debt. There is hardly any money to import items like gasoline, milk, cooking gas and toilet paper.

Before things began unravelling, Madushanka, a 27-year-old accountant, studied in Japan and hoped to work there. He moved back home in 2018 after his father died, to look after his mother and sister.

Madushanka finished his studies and found a job in tourism, but lost it in the shadow of 2019 terror attacks that rattled the country and its economy.

The next job evaporated during the pandemic. He’s now working for a management company, his fourth job in four years. But even with a reliable pay cheque, he can barely manage to support his family.

Food prices have tripled in recent weeks, forcing the family to seek out government handouts of rice and donations from nearby Buddhist temples and mosques. Madushanka’s savings are finished. 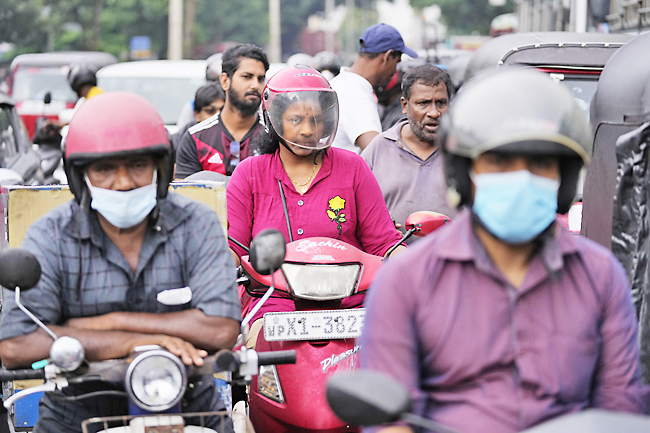 “Right now, there is only enough to survive – if there are months where we don’t get extra benefits from outside, we have to just hold on somehow,” he said.

Even past crises, like Sri Lanka’s nearly 30-year long civil war that ended in 2009 or the devastating 2004 tsunami, did not cause this degree of pain or anguish for those outside of the affected areas, experts said.

Until recently, Sri Lanka’s middle class, estimated by experts to be between 15 to 20 per cent of the country’s urban population, generally enjoyed economic security and comfort.

“The crisis has really shocked the middle class – it has forced them into hardships they were never exposed to before, like getting basic items, not knowing whether they could get fuel despite spending hours in line,” said senior researcher at the Centre for Policy Alternatives in Colombo Bhavani Fonseka.

“They have really been jolted like no other time in the last three decades,” Fonseka said.

Sri Lanka’s middle class began to swell in the 1970s after the country’s economy opened up to more trade and investment. It has grown steadily since, with Sri Lanka’s GDP per capita surging higher than those of many of its neighbours.

“The ambition was to own a home and car, be able to send your kids to a good school, eat out every few weeks and afford a vacation here and there,” said economist Chayu Damsinghe. “But now it feels like the middle class has lost its dream,” he added.

“If the middle class is struggling like this, imagine how hard hit the more vulnerable are,” Fonseka said.

Protests have raged since April, with demonstrators blaming President Gotabaya Rajapaksa and his government for policy blunders that torpedoed the economy and plunged the nation into chaos.

In May, a wave of violent protests forced Rajapaksa’s brother and then-Prime Minister Mahinda Rajapaksa to step down. His successor, Ranil Wickremesinghe, is banking on a bail-out package from the International Monetary Fund and help from friendly countries like India and China to keep the economy afloat.

In an interview with the Associated Press last week, Wickremesinghe said he feared food shortages might persist until 2024 as the war in Ukraine disrupts global supply chains, causing prices of some commodities to soar.

Sri Lanka’s economic predicament was compounded by a ban last year on imported chemical fertilisers that angered farmers and hurt harvests. The ban was lifted after six months, but the damage was already done, leading to food shortages.

Government officials have been given every Friday off for three months to save on fuel and grow their own fruits and vegetables as food reserves run low.

The inflation rate for food is 57 per cent, according to official data, and 70 per cent of Sri Lankan homes surveyed by UNICEF in May reported reduced food consumption. On a recent afternoon, residents swarmed a busy vegetable market in Colombo, sweating under the sun’s glare as they carefully compared prices of tomatoes and oranges with those at markets they had visited earlier.

Sriyani Kankanamge, 63, said she has stopped buying meat or fish and buys only a few kinds of vegetables.

“I am angry. Prices of every essential item are going up – rice, sugar, milk, chicken, fish. How can people eat?” she said bitterly.

Madushanka’s family has opted to give up three daily meals for just a late breakfast and dinner.

On a recent Friday, his mother, Ambepitiyage Indrani, was grinding coconut and boiling a pot of water over a thin stack of firewood.

When their gas cylinder ran empty in May, the thought of waiting in a queue with no guarantee of success seemed futile.

The kitchen ceiling, once a gleaming white, is now streaked with soot from the cooking fire.

An electric stove bought a few years ago has been sold.

Indrani has glaucoma in her left eye and is using her eye drops once a day instead of twice, as recommended by her doctor. The price for the medicine has quadrupled.

“It has been the hardest time of my life,” she said, recalling how just a few months earlier she used to cook extra food to give away to others in the neighbourhood.

The family’s radio and television set have been turned off for weeks, their scooter is parked outside, covered. They hardly use it any more, preferring to walk or take the bus rather than queue for fuel.

When the daily three hour-long power cut hits, Madushanka sometimes heads to the main protest site outside the president’s office.

Like many Sri Lankans he feels the only way out may be to leave.

“I had a simple dream – build a house, buy a car, work full-time during the week and go on holiday once in a while. I wanted to get married and raise a family,” he said. “But I’m scared this dream is no longer possible, at least not in this country.”