THE WASHINGTON POST – Much has been made of Simu Liu’s starring role in Shang-Chi and the Legend of the Ten Rings, Marvel’s first film centering on an Asian superhero – and rightly so. As Black Panther and Chadwick Boseman did for the Black superhero, Liu is breaking ground, cinematically and in the broader culture. The Canadian actor (best known for the sitcom Kim’s Convenience) tweeted as much, on Aug. 14: “We are the underdog; the underestimated. We are the ceiling-breakers. We are the celebration of culture and joy that will persevere after an embattled year.”

Those are heavy mantles to bear, for a film or a performer. And the expectation that the title of groundbreaker engenders can weigh down a movie, sometimes fatally. Fortunately for Shang-Chi, the movie does something else equally important.

It remembers to have fun. It’s a kick to watch – often literally – and the kind of popcorn movie summer is made for.

That’s something that Marvel movies haven’t always managed to do to the same degree, especially not in recent years, as the final phase of what’s known as the Infinity Saga – the epic story cycle that swelled to 23 films – wound down with the dark one-two punch of Avengers: Infinity War and Avengers: Endgame.

Shang-Chi is, after all, a comic book movie, based on a character known as the “Master of Kung Fu,” and first introduced in 1973: the year of Bruce Lee’s death, the posthumous release of Enter the Dragon and the year before the one-hit wonder Kung Fu Fighting hit the pop-music charts. It was the dawn of the chopsocky craze, and Shang-Chi, the movie, takes its DNA, very loosely, from that era.

Make no mistake: Shang-Chi looks and sounds like no other Marvel movie, and not just because of its mostly Chinese setting and cast, the martial-arts action and the large amount of Chinese dialogue. It is, at heart, a kung fu movie, albeit a 21st-century version of one, characterized less by Lee’s old-school punches and ki 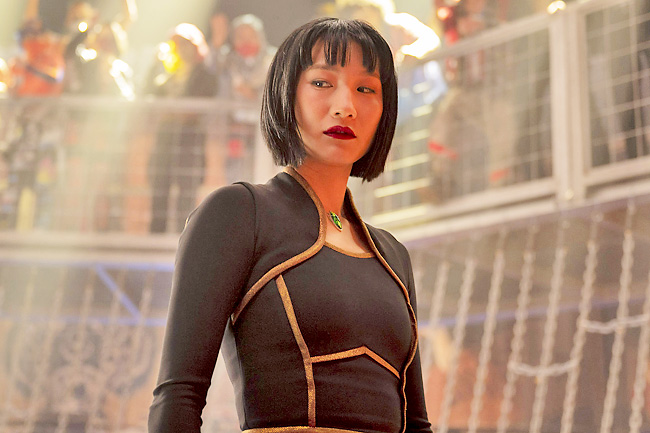 cks than by the enhanced, physics-defying Wuxia techniques that can only be performed with wires and trampolines. It’s not the first film in the new phase of the Marvel Cinematic Universe; that would be the recent Black Widow, a movie that, narratively speaking, feels more of a piece with the now-closed Infinity Saga. But Shang-Chi is, in many other ways, a first.

This is a great-looking film, filled with a climactic showdown between dragons – yes, plural – such eye-popping special effects as a moving bamboo-forest maze and acrobatic fight scenes – the first of which is staged on a speeding bus, careening pell-mell over the hills of San Francisco with no brakes.

That’s where, after a brief scene-setting prologue set in China, we first meet the adult version of our charismatic protagonist. Liu’s Shang-Chi – or Sean, as he calls himself, using the Americanised version of his name – is a fully assimilated Chinese immigrant, working as a valet parking attendant along with his girlfriend Katy (the ever-effervescent Awkwafina). But Shang-Chi soon has reason to reconnect with his Chinese roots. Thugs set upon him and Katy, unleashing abilities Katy didn’t know her boyfriend had, as Shang-Chi engages in some of the coolest hand-to-hand-combat you’ll see this summer. “Hand-to-hand” may be a misnomer, considering that one of Shang-Chi’s assailants is Marvel’s Razor Fist (Florian Munteanu), who has a machete where his forearm should be.

The goons, it turns out, were sent by Shang-Chi’s father Wenwu (Tony Leung) back in China, a power-mad, centuries-old villain and the possessor of the titular rings, which have endowed him with immortality, his own mad fighting skills and a terrorist army. Alert Marvel fans may remember the Ten Rings organisation referenced in earlier movies, going as far back as the Iron Man trilogy. A surprise appearance by a character from Iron Man 3 provides much of the film’s comic relief, as well as situating Shang-Chi firmly in the Marvel canon, and not as a stand-alone film.

Wenwu doesn’t want Shang-Chi dead, but is calling him home, along with our hero’s sister (Meng’er Zhang) and Katy, so that the family, all of whom are estranged from each other – for reasons that will only gradually be explained, but have a lot to do with Dad’s murderous impulses – can return to the village where Wenwu met Shang-Chi’s late mother. That’s the mystical, hidden realm of Ta-Lo. It’s not on any map (kind of like Black Panther’s Wakanda). Wenwu believes that his wife may still be alive, imprisoned in a cave in Ta-Lo, from which he intends to free her.

Uh-oh. That’s bad news for Ta-Lo. There is something in that cave, and it ain’t Mom.

Director Destin Daniel Cretton makes a smooth transition from such intimate fare as Short Term 12 and Just Mercy to the high-energy summer blockbuster. One way in which Shang-Chi breaks no new ground is in its observance of the by-now-formulaic bombast of the CGI-heavy third act that Marvel viewers have come to expect (and perhaps even crave).

That can get a bit exhausting, even in a film as pretty as Shang-Chi. And I could do without the character of Morris, a critter based on the mythical DiJiang – described by Katy as a chicken-pig – that, despite the absence of a head, understands English and is capable of giving driving directions, in squawks and bleats. It’s this film’s answer to the Ewok, and just as annoying.

Shang-Chi and the Legend of the Ten Rings is both an origin story and the story of a man confronting his roots and his destiny. It is a story that will continue, as you’ll learn if you stay for both of the two post-credit stingers. It may even turn out to be connected to Marvel’s The Eternals, as some fans have speculated that the heroes of that movie (due out on November 5) could be the source of the Ten Rings.

Does Shang-Chi rewrite the rule book for such things? No. Nor is likely to be remembered as one of Marvel’s best films. But it is, undeniably, a breath of fresh air. And it has already, just by existing, changed history.