Yetserday’s marathon contest was supposed to showcase the Nets’ star trio of Harden, Kevin Durant and Kyrie Irving playing together for the first time together.

Irving finished with 37 points, Harden had a triple double of 21 points, 10 rebounds and 12 assists and Durant tallied a team-high 38 points and 12 rebounds, but it wasn’t enough as the Cavaliers had seven players in double-figure scoring at the Rocket Mortgage Fieldhouse arena in Cleveland.

Turkey’s Cedi Osman scored 25 points, and Taurean Prince came off the bench to notch 17 as the Cavaliers bench outscored the Nets reserves 44-10.

“We seemed a little lost at times, which is natural because we haven’t played together. So there’s a little indecision,” Nets coach Steve Nash said. 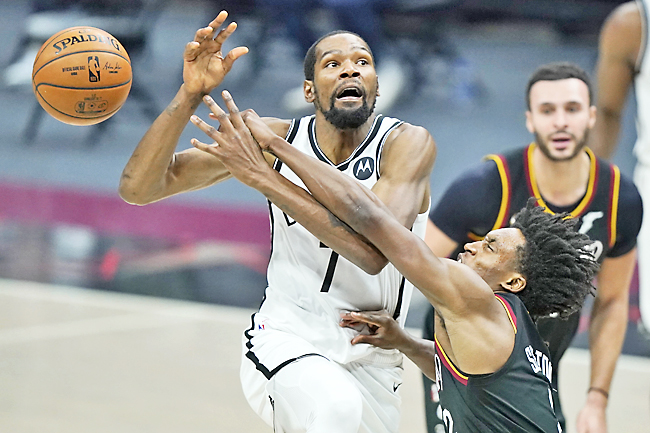 “We started the game turning the ball over, we had seven or eight in the first quarter. We cleaned it up and got ourselves back in the game, but obviously we have to defend better.”

“We’re just getting a feel for each other and this is a process that’s gonna take the entire year.”

Irving missed seven games for undisclosed purposes but was slapped with a USD50,000 fine by the league while he was out for violating the league’s COVID-19 safety rules. Irving was punished after video surfaced showing him attending a family birthday event without wearing a face mask.

Brooklyn had won five of seven games without Irving and this was just their third loss since January 5.

“We will have good nights, we will have great nights, but it is how we galvanise this group together and how we sacrifice and compromise for the greater good,” Irving said. “That still remains to be seen, obviously one game is out the way, but I am excited for what’s to come.”

Sexton hit the game-tying three-pointer with 1.2 seconds left in the first overtime period and scored 15 of his 42 in the second extra session.

Sexton set the tone for Cleveland in the second overtime, hitting a free throw early and then draining a three pointer with three minutes left to give the Cavs a 134-127 lead. Sexton nailed his fifth and final three pointer with 89 seconds left to make it 142-131 as the Cavaliers dominated down the stretch.

Sexton surpassed his previous career high of 41, set in March 2020 against Boston, by scoring 31 points after halftime. He shot 16 of 29 from the field overall after missing the previous five games with an ankle injury.