DUBAI, UNITED ARAB EMIRATES (AP) — Sailors involved in transferring fuel oil from an Iraqi tanker in the Persian Gulf to another vessel owned by a shipping company traded in the United States (US) discovered a “suspicious object” they fear could be a mine, authorities said on Thursday.

The discovery comes amid heightened tensions between Iran and the US in the waning days of President Donald Trump’s administration.

Already, America has conducted B-52 bomber flyovers and sent a nuclear submarine into the Persian Gulf over what Trump officials describe as the possibility of an Iranian attack on the one-year anniversary of the US drones strike in Baghdad that killed a top Iranian general.

Two private security firms said sailors feared they found a limpet mine on the MT Pola, a Liberian-flagged tanker that was receiving assistance on Thursday in the Persian Gulf off Basra.

A limpet mine is a type of naval mine that attaches to the side of a ship, usually by a diver-member of special forces. It later explodes, and can significantly damage a vessel.

The United Kingdom Marine Trade Operations, an organisation under Britain’s royal navy, said on its website that an “unknown object” had been attached to a ship’s hull in the vicinity of Iraq’s Khor Al-Zubair Port, without providing further information. 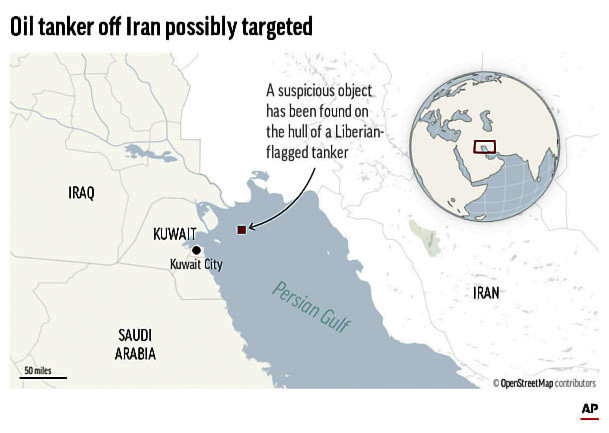