MIAMI (AP) – A loggerhead turtle (AP; pic below)whose left fin was destroyed in a shark attack is rehabbing at Zoo Miami’s new Sea Turtle Hospital, where veterinarians were able to save more than 100 of her eggs after she was rescued.

The Florida Fish and Wildlife Conservation Commission sent the turtle to the hospital on May 22 after she was found at the Port St Lucie power plant, Ron Magill, the zoo’s communications director said.

An ultrasound determined that the 50-year-old, 388-pound turtle was pregnant.

She also had scars on the shell that indicated it had been previously hit by a boat and attacked by another shark earlier in life, officials said. The hospital staff stabilised the turtle, dubbed Baymax, in a recovery tank and gave her fluids, vitamins and food that included squid and crab.

Then, on Memorial Day, she was moved to a sand-filled pen and given calcium and oxytocin to stimulate her labour. By Tuesday morning she had deposited over 100 eggs. 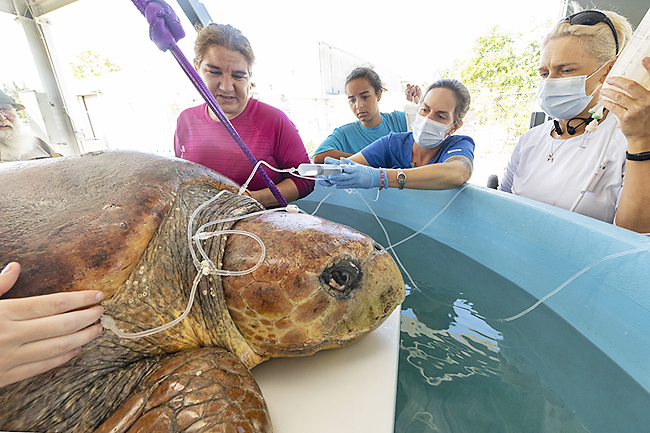