THE WASHINGTON POST – It was a floating toothbrush and a bottle top that changed everything for Emily Penn.

Penn, the founder of the ocean research non-profit eXXpedition was at the time sailing from England to Australia to start a new job as an architect. She dipped into the water for a bath. “When I came up to the surface, I saw a toothbrush floating by. And then a bottle top,” Penn said.

The now 35-year-old was 800 miles away from land and realised “that actually there was this plastic soup all around us in one of the most remote parts of our whole planet. I’d say that for me was the moment when everything started to change”, Penn said.

Her firsthand experience with the ocean’s plastic problem led Penn to change her plans.

She never started that job. Instead, she began organising beach cleanups and going on more sea trips. In 2014, she founded eXXpedition, a non-profit that takes all-female crews on sea voyages to understand the oceans’ plastic pollution problem and find solutions.

Since then, the organisation has taken 19 voyages with women from around the world.

Penn focussed on involving women after learning that harmful chemicals from plastic pollution that end up in our food have particularly negative consequences for those who are pregnant and their fetus, or unborn child. 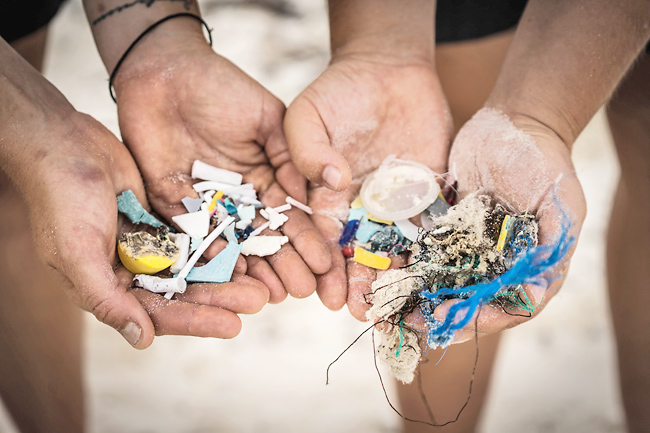 The women who make up the crew come from different backgrounds: “everyone from scientists to artists, journalists, designers, teachers, industry leaders, policymakers”, Penn said.

While scientists might seem like an obvious choice for a voyage studying ocean pollution, women from creative professional backgrounds are also tapped because of their storytelling skills.

One voyage included a woman who was a packaging designer. Plastic packaging is a major cause of pollution. “Someone who literally for a living designs and decorates plastic: That type of person has a really powerful experience at sea when they start seeing products (in the ocean) that they’ve actually put on the shelves,” Penn said. The woman quit her job after the voyage and now works as an independent design consultant for mission-based companies.

There is a lot to observe and study on these voyages. By 2050, plastic will probably outweigh all the fish in the sea, according to the United Nations’ Intergovernmental Oceanographic Commission. Between 8.8 million and 11 million tonnes of plastic make it to the ocean every year.

Plastic doesn’t decompose as other materials might. Water and wind cause plastic to disintegrate into much smaller pieces, known as microplastics. Microplastics are harder to clean up and easier for ocean species to ingest.

On the eXXpedition voyages, the women take samples from sea and land for data collection, and they also have workshops to think about and talk through potential solutions.

“The last part of the voyage – we really focus on what happens next and start putting together an action plan,” Penn said. She added that the team identifies “what I like to call your superpower, you know, the thing that makes you unique and brilliant that you can contribute to this wider issue”.

The data eXXpedition collects is shared with research universities. The non-profit group’s “round the world” voyage in 2019 – which ended early because of the pandemic – resulted in a research paper being published about pollution in the southern Caribbean.

The paper found that a holistic approach was necessary to finding solutions.

It was this holistic mindset that led to eXXpedition launching its Shift platform.

It’s a website filled with ideas about how one person, a small group or even a large company can reduce plastic in the ocean.

Visitors to the site can scroll through rows of cards and click on one or more to explain the idea, reveal its benefits, challenges and links to additional information.