THE WASHINGTON POST – It’s been too long since we’ve been to the movie theatre, so join us as we refresh your memories of the experience. Specifically, let’s talk about the great science fiction and fantasy novels that have wowed us on the big screen.

Everyone has their classics. Lavie loves Paul Verhoeven’s Starship Troopers, the controversial 1997 film that parodied Robert A Heinlein’s 1959 novel (and is slated for a reboot). Silvia is a fan of Roger Corman’s Poe cycle and the stories that inspired it. There are so many science fiction and fantasy books-to-films, so we decided to focus on favourites that perhaps haven’t gotten as much attention as they should.

Silvia: I don’t often follow the old adage: Read the book before you watch the movie – but I should have for Under the Skin by Michel Faber. I saw the film when it came out in 2013, and I’m afraid that when I read the novel afterward, I could not shake the impression of Scarlett Johansson as the alien who picks up men and takes them to what is essentially a meat processing facility. In the novel, her character has a more bizarre appearance and the book has a dreamy, haunted quality, along with moments of shocking cruelty. Slow, but delicious and disturbing.

I discovered The Repossession Mambo by Eric Garcia after I chanced upon the film Repo Men (2010) with Jude Law in the lead role. Both share a great concept: In the near future, you can buy spare organs with ease, but you better make your payments. Enter our cynical protagonist who used to repossess organs and is now being hunted for his heart. The result is a noir that also has a bitter sense of humour. It reminded me a bit of Philip K Dick and some of his harried characters. 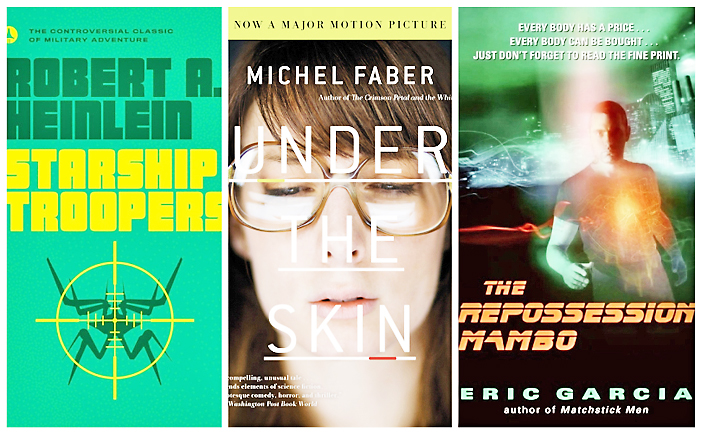 My third choice is The Company of Wolves (1984), an adaptation of Angela Carter’s short story of the same name (from the collection The Bloody Chamber) and the radio play version that can be found in The Curious Room: Collected Dramatic Works by Angela Carter. It’s amazing how such a short story could give way to a whole movie, and yet if you’ve ever read Carter’s work it makes perfect sense. Director Neil Jordan distills all the Freudian, fairy tale imagery and horror contained in Carter’s work into one surreal version of Little Red Riding Hood with werewolves. Many authors have reworked fairy tales, but Carter was one of the first to attempt such bold takes, and remains one of the best.

Lavie: The Japanese film Battle Royale (2000) is based on a novel by Koushun Takami that’s available in the United States (US) thanks to the efforts of the Haikasoru imprint. I never tire of recommending Haikasoru’s books, and Battle Royale: Remastered (translated by Nathan Collins) – a pulpy tale of school kids pitted against each other on an island – is no exception. Another great from Asia is the lavish 2019 Chinese science-fiction film The Wandering Earth, which is based on Liu Cixin’s novella. You can find it in his English-language short story collection of the same name. Moving on to France, Planet of the Apes is improbably based on Pierre Boulle’s La planète des singes (originally translated as Monkey Planet in the United Kingdom). And yes, Boulle also wrote the novel The Bridge Over the River Kwai.

You’d need to be intrepid to have watched the 1990s Israeli-made, English-speaking film The Road to Ein Harod, a very odd dystopia starring, I kid you not, Gregory Peck’s son and Benito Mussolini’s granddaughter. It was a critically and commercially panned venture. But it is based on author Amos Kenan’s miniature masterpiece of the same name, a surrealist, nightmarish odyssey set in a near-future Israel that ends with a grand science fictional twist. Translated from Hebrew in 2001 by D Hecht, the book is only available secondhand – one for you obscurists out there.

Another difficult find that’s worth it: The 2004 Thai film The Siam Renaissance is the tale of a Thai archivist in France who time-slips to the royal court of Siam in the 19th Century, and it is fantastic, but the novel it is based on, Thawiphop (Two Worlds) by Thommayanti has never been translated. It was huge in Thailand, though, having been adapted multiple times since publication. Could an enterprising publisher please pick up this historical fantasy romance for the English-language reader?

Finally, let’s not forget a couple of classic science fiction short stories that got turned into movies. Robert Sheckley’s The Seventh Victim, about a deadly game of hunting humans, improbably became a film (The Tenth Victim) starring Marcello Mastroianni. And Mimsy Were The Borogroves by CL Moore and Henry Kuttner became, 64 years later, the movie The Last Mimzy. The films may not have fared as well, but the stories are at the very heart of science fiction’s history, and I wish more people read them.