LOS ANGELES (AP) – Dennis Schröder scored 14 of his season-high 32 points in the fourth quarter and the undermanned Los Angeles Lakers improbably overcame LeBron James’ absence for a 112-109 victory over the Miami Heat on Wednesday.

Russell Westbrook had 21 points, nine assists and eight rebounds for the Lakers, who rallied from a six-point deficit in the fourth quarter and held off Miami without their top three scorers. James stayed home with a cold, while Anthony Davis and Lonnie Walker are injured.

Thomas Bryant added 21 points and nine rebounds, while Schröder was brilliant down the stretch. The German point guard scored nine points in the final 2:35, and his 9-for-9 performance at the free throw line in the fourth quarter sealed the Lakers’ fourth victory in five games.

“I’ve got to be more aggressive anyway, even when AD and Bron are coming back, to open up things for AD and Bron,” Schröder said. “Hearing that Bron is sick and AD is out as well, everybody just gave a little bit more.”

Schröder rolled his ankle midway through the fourth quarter, and Lakers coach Darvin Ham intended to take him out of the game – but Schröder’s teammates said he insisted on staying in.

Bam Adebayo had 30 points and 13 rebounds, and Jimmy Butler had 27 before missing a three-pointer at the buzzer for the Heat, who lost for only the fourth time in 12 games.

“They were rolling,” said Kyle Lowry, who had 11 points. 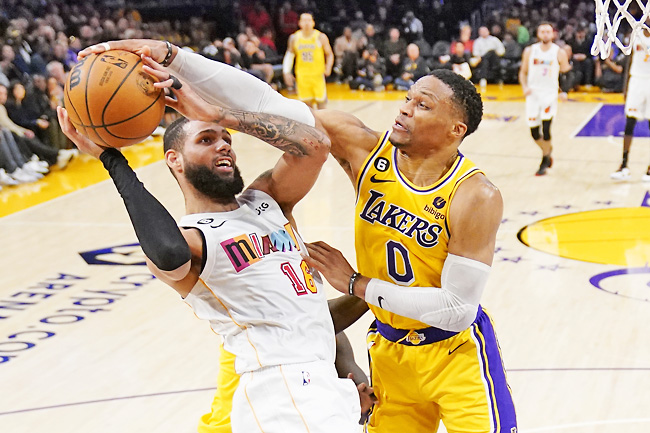