Saving your furniture from kitty claws

THE WASHINGTON POST – First, the bad news: You’re not going to stop your cat from scratching altogether. It’s a natural behaviour for felines, and they do it for several reasons.

It’s a way to keep their claws in tiptop shape and to mark their territory, both with the visual cue of scratch marks and with pheromones they deposit through their paws. Plus, as you’ve probably seen, scratching offers an opportunity for a good stretch. You’ve got to let your cat be a cat, after all!

But don’t despair. There are ways to keep your sofa or rug safe. The key is to redirect your adorable little destroyer to another target. Here’s how.

DO NOT DECLAW YOUR CAT

Declawing your cat is one 1990s trend that should never be resurrected. Turns out the procedure is quite cruel. It involves amputating the knuckle from the end of the cat’s paw, and it can cause long-lasting pain, said Purr: The Science of Making Your Cat Happy author and animal behaviour expert Zazie Todd. “There is no benefit to the cat,” she said. “If you think of scratching as a normal behaviour, you don’t want to prevent cats from being able to do something that’s normal for them.”

A growing number of veterinary practices are refusing to declaw cats, said University of Georgia College of Veterinary Medicine clinical assistant professor Sara Everett. Others do so only in extreme cases (like if the owner might otherwise give up the animal).

More than a dozen United States (US) cities, along with New York and Maryland, have passed bans on the procedure. 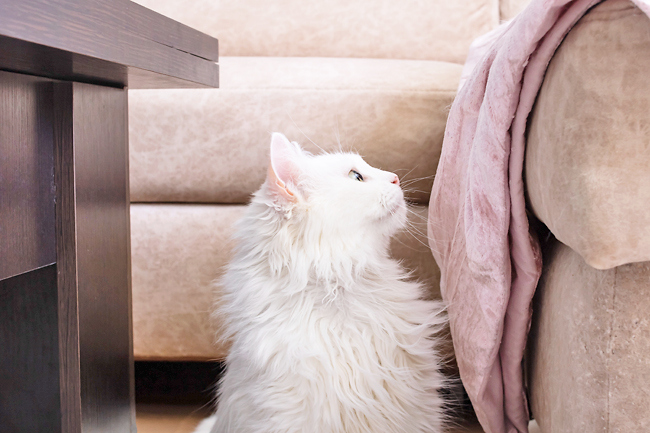 The ideal place for your cat to use her claws is on a scratching post. But not all of them are created equally, and it might take some trial and error to find a post that your cat loves.

One critical factor to consider is texture. Some cats like the knobby feel of a carpet-covered scratching post, while others prefer cardboard or sisal. “You might just have to offer them a little scratching post cafeteria or buffet and see what they select,” said Animal Behaviour Wellness Centre owner in Fairfax and veterinary behaviourist Amy Pike.

There’s also the question of vertical versus horizontal. Most felines love tall scratching posts, but some prefer a surface flush with the ground. If you’re going vertical, make sure you get something sturdy. Total Cat Mojo author and cat behaviourist Jackson Galaxy said that part of the appeal of furniture is that it doesn’t tip over when cats pull down during a long stretch. If you’re looking to supplant a sofa or chair, then you’ll need to find a stable scratching post with some heft at the base.

Finding the perfect scratching post won’t matter if you hide it away. Your cat hasn’t been going to town on your favourite chair as an act of revenge, but because you spend a lot of quality time there.

Busy areas of the house tend to be “areas where they get good attention from their owners, like petting and cuddling and playing”, said Everett, so cats want to mark those places as their territory. (When you put it that way, it’s kind of sweet.)

That means placing a scratching post in a rarely used space won’t work: “They don’t care about scratching areas of the home that aren’t valuable to them,” said Everett. Instead, put the post near the furniture that your cat is ruining so she’ll more readily see it as a substitute. You can add catnip to the post to make it even more appealing.

DON’T PUNISH YOUR CAT FOR SCRATCHING

This section kind of sounds like it was written by a cat, but it’s true: Punishment doesn’t work very well for our feline friends. Your cat probably won’t connect your harsh words or tone with the scratching, so the only thing you’ll accomplish is making her anxious.

Instead, try rewarding your cat for the behaviour you do want. “If you see them using their scratching post and you wait until they finish and then you very quickly get them a treat, that will make them more likely to use that post in the future,” said Todd.

PROTECT YOUR FURNITURE FROM CAT SCRATCHING

There are several ways you can guard the sofa, though some methods are more aesthetically pleasing than others.

You can wrap your furniture with a product like Sticky Paws – essentially double-sided tape that makes scratching feel less-satisfying for many cats.

Galaxy uses these types of products as a training tool: “It doesn’t mean for the rest of your life with this couch or cat you’re going to need to keep that stuff on there – they’re going to learn”.

He also stressed that this tactic only works if you provide another outlet for scratching.

Other options include adding throw blankets to protect a scratch-prone area, or wrapping a material like sisal around the lower part of a chair or sofa to protect it.

If you’re shopping for new furniture, think about the textures your cat likes to scratch. If she loves bumpy fabrics, choose pieces upholstered with smoother materials, like velvet or leather.

New furniture also provides a fresh opportunity to train your cat, said Todd, because it doesn’t have your pheromones on it yet. “If you’re bringing home something new, it’s going to smell different, and that would be a good point to make sure that you’ve got your scratching post lined up and in the right place,” she said.

Some cats are more tenacious and destructive than others. If you consistently come home to ruined furniture, you might want to consider a product such as Soft Paws – little caps that you put over a cat’s natural nails.

These allow your cat to engage in normal scratching without causing so much destruction.

They last about a month to six weeks, and while they can be a bit cumbersome to apply, Everett said some veterinary practices will put them on for owners. As a fun bonus, they come in a range of colours, so your cat will look like she’s had a bright manicure.

SOMETIMES YOU HAVE TO LET THE CAT WIN

On occasion, you just have to surrender. Pike, for instance, has one chair in her house that became a scratching post for her cat “and we leave it as such”, she said. When cats express such a strong preference for a piece of furniture, it’s kinder to leave it as an option for them than to get rid of it entirely, she said. (This is also true of a scratching post that you may think has reached the end of its life). By ceding the chair, Pike has basically protected the rest of her furniture.

“When we have company, we take it away and we move it so it doesn’t look so disgusting,” she said, but otherwise the chair now belongs to the cat. “It’s become a cat scratching post that someone can sit on occasionally.”