Saving the past to secure the future

ANN/CHINA DAILY – Shortly after Zhu Yuanzhang, the founding emperor of the Ming Dynasty (1368-1644), expanded the territory to present-day Anshun, Guizhou province, he thought of a way to consolidate his governance over the newly gained land.

Tens of thousands of his loyal followers in today’s Anhui province as well as other regions in East China, mostly soldiers and their families, migrated long distances to get stationed in the fortified villages, known as tunpu. They retained the customs and traditions of their hometown, which are distinctive from surrounding indigenous communities, including dialects, food, clothing, and, of course, music.

For people living in tunpu, a folk opera form known as dixi (“the opera on the ground”) has been a key ingredient for their rituals. Telling ancient wartime legends, from the depths of history, the opera genre has become a pillar art form to pass down patriotism and loyalty from one generation to another.

For senior dixi performer Zhan Xueyan, that opera has been part of his memory since childhood.

Wearing masks throughout the performance, people have to rely on body gestures and resonating voices in dixi to express emotions. Zhan smiles when he said he may be bestowed with the special talent to take the relay baton. 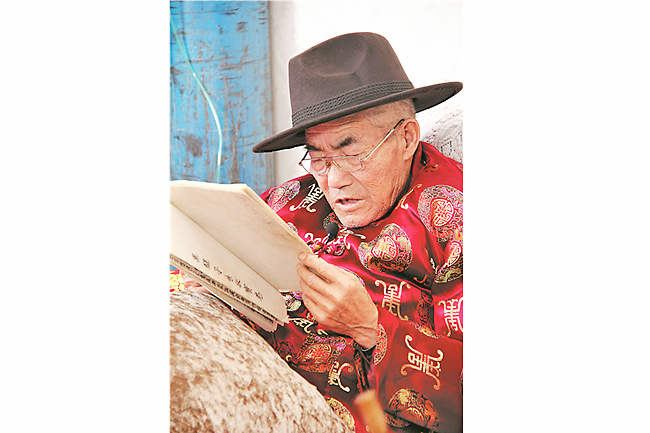 He is the 16th generation dixi performer in his family. He is always deeply emerged in his performance and often cries behind the mask. Taking the lead role in a series of historical-themed repertoires in the past decades and touching numerous fellow villagers and tourists from afar, he was registered as an inheritor of national-level intangible cultural heritage, or ICH, in 2008.

In Zhan’s eyes, the opera marks a key cultural lineage of tunpu people, but he has concerns: his son’s generation shows little interest in carrying on this family career.

“Many kids are interested though,” he, now 70, said. “They’re smart and hard-working. They’ll surely exceed me, if they’re willing to perform dixi in the future.”

Fortunately, a nationwide documentary programme known as Chinese Memory is battling the clock to rescue footage before it vanishes from the collective memory. Led by the National Library of China in 2015, hundreds of short documentaries, usually half-a-hour long, have been produced to capture details of the ICH items and those inheritors’ life.

As the country celebrates Cultural and Natural Heritage Day, 115 such selected documentaries, including the one about Zhan, were broadcast in a one-month-long exhibition, both online and offline.

Hopefully, through streaming apps like Youku and Douyin and mainstream news websites as well as 170 public libraries across the country, these inheritors’ voices can be better heard.

“In our project, a documentary aims not only to be a recording of oral history or reference to revive the intangible cultural heritage,” said deputy director of public education department of the national library Tian Miao, who is in charge of Chinese Memory. “It can enlarge our database of files and be widely spread through mass media.”

According to Tian, production of the documentaries can combine academic research and technical teams, and create a format for regular recording of ICH items in everyday work protecting such heritage.

“They can be of high value, both as visual documentations and art,” Tian said. “Some productions can join documentary film festivals home and abroad… Only when the public’s enthusiasm for ICH was triggered can our work to preserve these heritages benefit from a positive feedback loop.”

In front of cameras, many ICH inheritors demonstrate not only exceptional skills but also their determination to uphold a cultural obligation towards their fellow people and homeland.

In Libo county, Guizhou province, Pan Laoping of the Sui ethnic group spares no effort to pass an ancient writing system to the young generation. Encyclopedically recording Shui people’s life, the writing system gains new energy in major festivals and rituals as a reminder of ancestors and past life.

But the project operators understand the emergency of their work. This year, Pan is 86, and Guo is 96.

Time has taken its toll of the energetic hearts who keep nourishing the heritage. Both Qiao and Xu passed away after the documentaries were shot. Among 115 ICH inheritors showcased in the ongoing exhibition, 16 have died.

Tian thus feels even greater significance of their job.

“People are ageing fast,” he said. “But memory can be everlasting. Only if their unique technique can be remembered by people, achievement of our protection can be shared.”

Chinese Memory is going on. As Tian reveals, all 3,000-odd national-level inheritors of ICH will be recorded.