XAPURI, BRAZIL (AP) – Rubber tapper Raimundo Mendes de Barros prepares to leave his home, surrounded by rainforest, for an errand in the Brazilian Amazon city of Xapuri. He slides his long, scarred, 77-year-old feet into a pair of sneakers made by Veja, a French brand.

At first sight, the expensive, white-detailed urban tennis shoes seem at odds with the muddy tropical forest. But the distant worlds have converged to produce soles made from native Amazonian rubber.

Veja works with a local cooperative called Cooperacre, which has reenergised the production of a sustainable forest product and improved the lives of hundreds of rubber tapper families. It’s a project that, though modest in scale, provides a real-life example of living sustainably from the forest.

“Veja and Cooperacre are doing an essential job for us who live in the forest. They are making young people come back. They have rekindled the hope of working with rubber,” Raimundo’s 24-year-old son Rogério Barros, , told The Associated Press (AP) as he demonstrated how to tap a rubber tree in the family’s grove in the Chico Mendes Extractive Reserve.

Extractive reserves in Brazil are government-owned lands set aside for people to make a living while they keep the forest standing.

Rubber was once central to the economy of the Amazon. The first boom came at the turn of the 20th Century. Thousands of people migrated inland from Brazil’s impoverished Northeast to work in the forest, often in slave-like conditions. 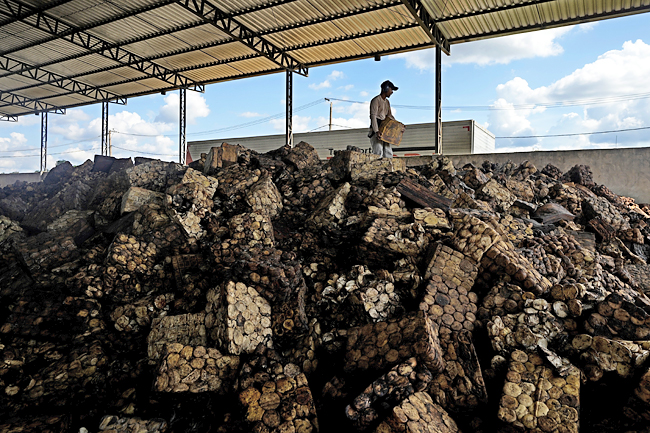 That boom ended abruptly in the 1910s when rubber plantations started to produce on a large scale in Asia. But during World War II, Japan cut the supply, prompting the United States (US) to finance a restart of rubber production in the Amazon.

After the war, Amazon latex commerce again fell into decline, even as thousands of families continued to work in poor conditions for rubber bosses.

In the 1970s, these relatively wealthy individuals began selling land to cattle ranchers from the south, even though, in most cases, they didn’t actually own it, but rather just held concessions because they were well-connected with government officers.

These land sales caused the large scale expulsion of rubber tappers from the forest. That loss of livelihood and deforestation to make way for cattle raising is what prompted the famous environmentalist Chico Mendes, together with a cousin of Barros, to found and lead a movement of rubber tappers.

Mendes would be murdered for his work in 1988.

After Mendes’ assassination, the federal government began to create extractive reserves so that the forest could not be sold to make way for cattle. The Chico Mendes reserve is one of these.

But the story did not end with the creation of the reserves. Government attempts to promote the latex, including a state-owned factory in Xapuri, failed to create a reliable income.

What sets the Veja operation apart is that rubber tappers are now getting paid far above the commodity price for their rubber. In 2022, the Barros family received USD4.20 per kilogramme of rubber tapped from their grove. Before, they made one tenth that amount.

This price that shoe company Veja pays the tappers includes bonuses for sustainable harvests plus recognition of the value of preserving the forest, explains, Sebastião Pereira in charge of Veja’s Amazonian rubber supply chain. The rubber workers also receive federal and state benefits per kilogrammes.

Veja also pays bonuses to tappers who employ best practices and local cooperatives that buy directly from them. The criteria range from zero deforestation to the proper management of rubber trees. Top producers also receive a pair of shoes as a prize.

All the rubber goes to the Cooperacre plant in Sena Madureira, in Acre state, where raw product is cut, washed, shredded into smaller pieces, heated, weighed, packed and finally shipped to factories that Veja contracts with in industrialised Rio Grande Sul state, thousands of miles to the south, as well as to Ceara state, in Brazil’s Northeast.

From there the sneakers are distributed to many parts of the world. Over the last 20 years, Veja has sold more than eight million pairs in several countries and maintains stores in Paris, New York and Berlin.

However, it has not been a game changer for the forest in the Chico Mendes Extractive Reserve, where almost 3,000 families live. The illegal advance of cattle, an old problem, has picked up. Deforestation there has tripled in the past four years, amid the policies of former president Jair Bolsonaro, who was defeated in his reelection bid and left office at the end of last year.

Cattle long ago replaced rubber as Acre’s main economic activity. Nearly half of the state’s rural workforce is employed in cattle ranching, where only four per cent live from forest products, mainly Brazil nuts.

According to an economic study by Minas Gerais Federal University, 57 per cent of Acre’s economic output comes from cattle. Rubber makes up less than one per cent.

Surrounded by cattle pasture and paved highway, the entry point for deforestation, Chico Mendes has the third highest rate of deforestation of any protected reserve in Brazil. The growing pressure of cattle on the reserve, which has already lost nine per cent of its original forest cover, even led Veja to set up its own satellite monitoring system.

“Our platform shows a specific region where deforestation is rampant. So we may go there and talk. But we are aware that our role is to offer an alternative and raise awareness,” Pereira told the AP in a phone interview. “We are careful not to cross the line, as the public authority should be the one doing the law enforcement.”

According to the leader of Acre’s branch of the association of federal environmental officials Roberta Graf, the Veja experience is essential as it shows a path for living inside extractive reserves sustainably. But to achieve that, she argues, requires a joint effort that includes government at different levels, nonprofits and grassroots organisations.

They enjoy making a living off the latex,” she told the AP in an interview in her home in Rio Branco, Acre’s capital.

“There are many forest products. Copaiba, andiroba (vegetable oils), Brazil nuts, wild cacao, and seeds. The ideal should be to work with all of them according to what each reserve can offer.”