AP – Have you ever wondered what makes a story great? George Saunders has, and at Syracuse University, where he has taught for more than 20 years, he takes his students under the hood of great fiction to show them how it works. Now, for the price of his latest book – a lot cheaper than an MFA – he’ll do the same for you.

A Swim in a Pond in the Rain billed as a master class in how to read and write, is effectively two books in one: seven classic Russian short stories by Chekhov, Turgenev, Tolstoy and Gogol paired with funny, lively, profound essays by Saunders explaining their art, craft and
enduring appeal.

Saunders, the bestselling author of CivilWarLand in Bad Decline, Tenth of December and Lincoln in the Bardo is the best possible guide to have on this invigorating tour through FictionLand because although he thinks like the MacArthur “genius” that he is, he talks like the guy sitting next to you.

For instance, in Chekhov’s In the Cart he refers to a character as “an amiable doofus” — not exactly a literary term of art, but in this case, a spot-on description.

Typically, he reserves his commentary until the end, although in this particular story, he interrupts the narrative a page at a time to explain what Chekhov is doing and the effect it has on us as readers. 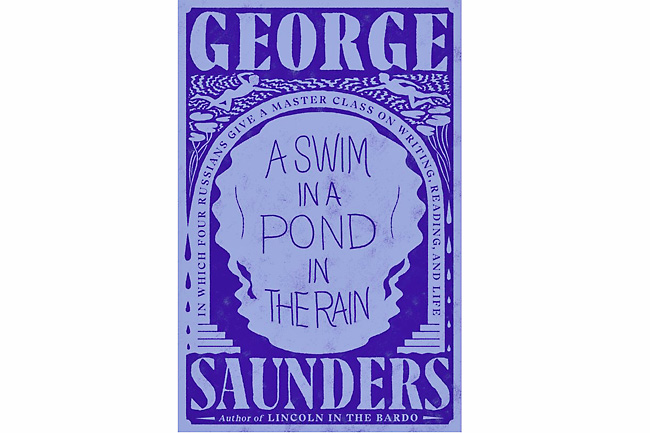 Is it irritating? Well, a little, but ultimately, it’s useful because it forces us to slow down and return to the slower rhythms of a college classroom, where one’s only job is to think hard and think well.

Beyond the realm of literary fiction, Saunders may be best known for a 2013 commencement address at Syracuse that went viral, in which he urged graduating students to “err in the direction of kindness”.

Among its many virtues, A Swim in a Pond in the Rain could be seen as a prolonged exercise in kindness – Saunders wants to make us better readers so we might become better citizens of earth.

“The part of the mind that reads a story is also the part that reads the world,” he said. “It can deceive us, but it can also be trained to accuracy; it can fall into disuse and make us more susceptible to lazy, violent, materialistic forces, but it can also be urged back to life, transforming us into more active, curious, alert readers of reality.”