LEICESTER (AFP) – Jadon Sancho fired Manchester United to a 1-0 win at Leicester on Thursday as the England forward showed he still has a role to play despite the big-money signing of Brazil winger Antony.

Sancho netted with a clinical finish in the first half to seal United’s third successive Premier League victory.

It was a well-timed contribution from Sancho, coming just hours after United officially confirmed their GBP82 million (USD94 million) swoop for Ajax’s Antony.

United manager Erik ten Hag worked with Antony in Amsterdam and the 22-year-old looks likely to be a regular in the right wing role currently occupied by Sancho.

Sancho did his best to remind Ten Hag of his qualities with his second goal of the season.

United moved up to fifth and sit just one point adrift of the top four as Ten Hag begins to make an impact after a nightmare start to his reign.

Beaten by Brighton and Brentford in the first two matches of the Ten Hag era, United have climbed off the bottom of the table without looking completely convincing. 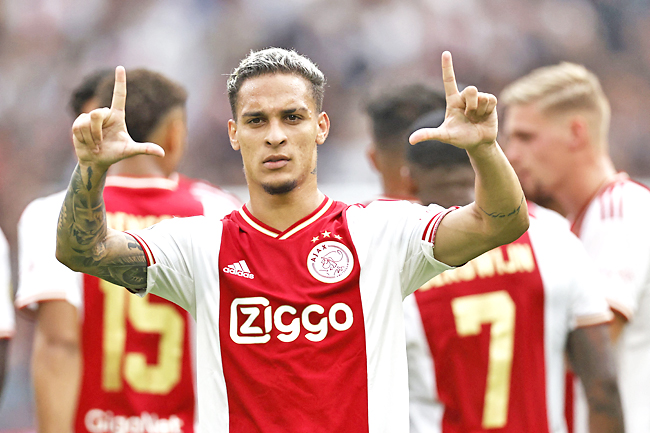 But Ten Hag was satisfied with his team’s latest display of spirit and determination, the qualities he demanded after the 4-0 loss at Brentford.

“It is another step forward so I am happy with that. We showed good team spirit. We had 11 players on pitch who fought for each other and scored a lovely team goal,” Ten Hag said.

“When we have 11 players on the pitch who can defend and attack together, and we have energy, you see what you can achieve.

“Still, there is improvements to make but that is normal at this stage of the season. With better decisions we should have scored a second goal. We have to be more ruthless.”

United were unchanged from the side that won 1-0 at Southampton last weekend, meaning Cristiano Ronaldo was reduced to a second half substitute appearance for a third successive game.

Ronaldo had hoped to leave United before the transfer window shut on Thursday, but the Portugal star was unable to find a suitor willing to meet the club’s asking price and able to offer him Champions League football.

Ten Hag said he is “on the same page” with the 37-year-old striker about his role, but Antony’s arrival could further limit Ronaldo’s playing time.