THE STRAITS TIMES – A rare sambar deer was killed in an accident on the Bukit Timah Expressway (BKE) in Singapore last Thursday night.

Videos shared on social media show the animal lying motionless in the middle of the expressway, with vehicles passing by.

The Land Transport Authority (LTA) tweeted shortly after 9.30pm on Thursday, warning motorists of an accident on the BKE – which separates the Bukit Timah and the Central Catchment nature reserves – towards Woodlands before the exit to the Kranji Expressway.

Muhammad Azhari said he was riding his motorcycle home on the BKE when the incident occurred a few vehicles ahead of him.

“I thought it was a wild boar or stray dog, which are more common roadkill,” said the 28-year-old auxiliary police officer, adding that he helped direct traffic around the deer and called LTA’s hotline.

The National Parks Board (NParks) said it was aware of the incident. “This is the only incident involving a sambar deer that we know of on an expressway this year,” said NParks wildlife management group director Adrian Loo.

Co-chief executive of animal welfare group Animal Concerns Research and Education Society (Acres) Kalai Vanan said its wildlife rescue team received a call about a sambar deer on the BKE at about 10pm that day.

The deer may have been drawn by the sight of a forested area on the opposite side of the expressway, said a representative of the Singapore Sambar Deer Group, which monitors the endangered species in Singapore. 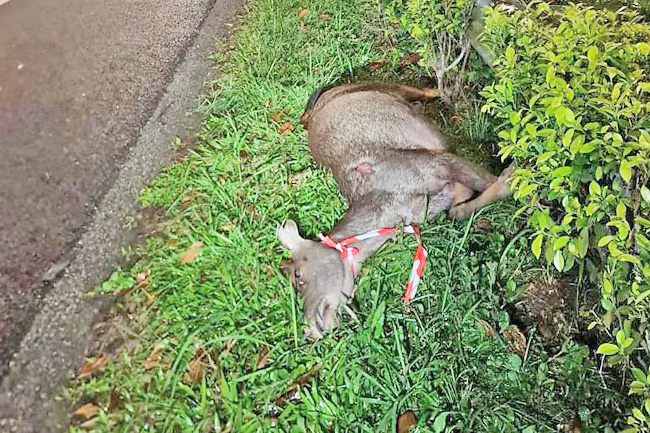