His Majesty received the royal salute and inspected the parade under the command of 1061 Lt Muhammad Ridhwan bin Haji Ralif of the RBN, which was then followed with a march-past by the officer cadets.

After delivering the titah, His Majesty presented awards to the best officer cadets of the 19th intake. 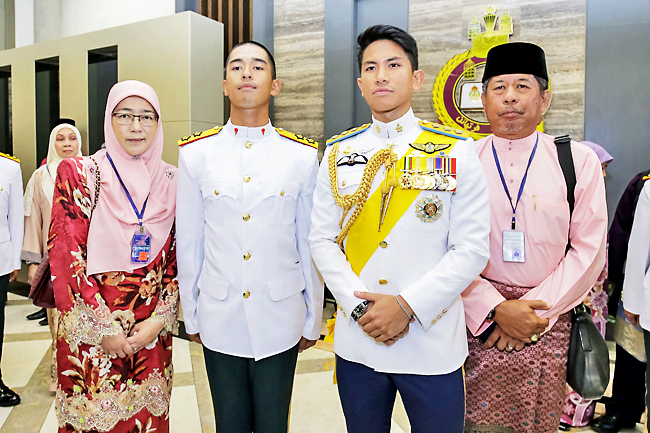 The ceremony proceeded with a presentation of the Sword of Honour to Officer Cadet Mohammad Zulfahmi Solihin @ Abdul Hannan bin Haji Zulhazmi, who holds a Bachelor of Science in Mechatronics from University of Melbourne, Australia.

The Sword of Honour is the foremost award bestowed by His Majesty to an officer cadet with the highest overall achievements in basic military training – academically and physically – and in all aspects of leadership.

The Best Academic Award was presented to Officer Cadet (U) Mohammad Khalid Wassadisalleh bin Haji Mahmud, who holds a Bachelor of Business (Hons) in Business Administration from Universiti Brunei Darussalam, based on his overall academic performance throughout the course.

The Best Military Skills Award was presented to Officer Cadet Muhammad Atthar Ridzwan bin Haji Muhammad Alamizan, who holds a Bachelor of Engineering (Hons) in Chemical Engineering from Universiti Teknologi Brunei, based on his excellent achievements in all areas of military skills.

The Best in Physical Training Award was awarded to Officer Cadet Awangku Ahmad Muqri bin Pengiran Sahbirin, who holds a Bachelor of Hospitality Management (Hons) from SEGi University, Malaysia, in recognition of his outstanding achievements in physical training.

The monarch received a pesambah known as Miftah Annajah (Key of Success) from the newly-commissioned officer cadets.

This was followed by a get-together ceremony (Majlis Junjung Ziarah) with the newly-commissioned officer cadets and their families.

The Sovereign’s Parade is the culmination of the RBAF Officer Cadet School’s prestigious intensive military training to equip newly-commissioned officers with knowledge, confidence, discipline, a sense of professionalism and leadership skills.