NEW YORK (AP) – When Sadie Sink (AP, pic below) joined the cast of Stranger Things in its second season, the then 14-year-old was already a fan of Netflix’s megahit show. But with the series turning many of the teen stars into household names overnight, attempting to carve out her own lane wasn’t easy.

“I kind of knew what I was stepping in to, but I didn’t really know until I was in it,” said Sink. “Being the new kid, I think it really gave me a perspective on everything. So, I kind of liked coming in a little bit later, even though I definitely had like the biggest imposter syndrome, like, ever.”

Sink is far from an imposter. Her Stranger Things character, Max, was more integral to the storyline last season, and her performance when she freed herself from the evil trance of the monster Vecna while listening to Kate Bush’s Running Up That Hill became a huge cultural moment for both the song, which roared back onto the charts.

The 20-year-old has joined her Stranger Things co-stars as a household name, leading to her selection as one of The Associated Press’ (AP) Breakthrough Entertainers of 2022.

Other honourees include Iman Vellani, Tenoch Huerta, Stephanie Hsu, Danielle Deadwyler and others whose work has put them on the path to superstardom. 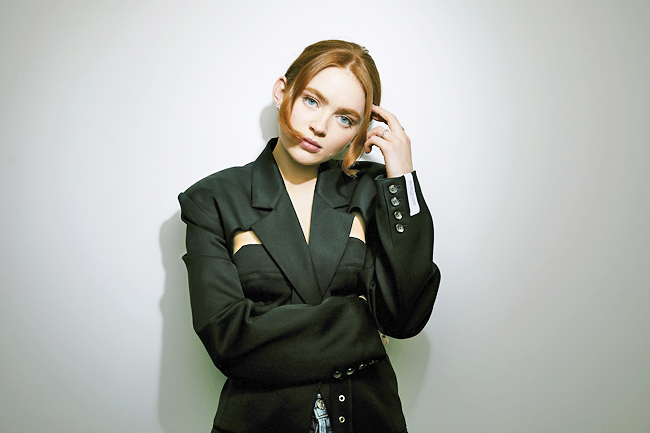 The smiley Texan has built an impressive resume first rooted in theater, and now blossoming with The Whale, Darren Aronofsky’s buzzy new film touted as Brendan Fraser’s comeback role as an obese English teacher whose health issues prompt him to reconnect with his estranged daughter, played by Sink.

“This has definitely been a big year just in terms of career milestones,” she said. “It’s just nice to have these opportunities and to have kind of found acting at a young age and to be able to stick with it.”

Easily recognised by her flowy red locks, Sink said The Whale was not only a career opportunity, but an education.

“The whole project as a whole, I think, was a big moment for me, just in terms of becoming fully comfortable in front of a camera. I think it takes a really long time to do that. And especially for the more vulnerable scenes, you’re on set, the lights and everything… the stakes feel really high,” she said. “Through working on this, I think I really got comfortable with the help of Brendan and Darren. And that was, I think, a really educational experience for me, and I think I carried a lot with me after that on to Stranger Things.”

The fourth of five siblings, Broadway shows on YouTube inspired seven-year-old Sadie and her older brother Mitchell to begin acting in local plays. By nine, she was regularly performing at Houston’s Theatre Under the Stars before landing the title role Annie the following year for the 2012 Broadway revival.

But after a few TV guest appearances, working with Helen Mirren on the Broadway play The Audience morphed her professional acting dream from possibility to reality.

“It just like kind of really shifted my relationship with acting being around someone like Helen Mirren and just seeing how they approach their craft. That’s like a master class and I just saw it in this whole new light,” said the Dear Zoe lead. “I think that’s really the moment that I knew that this was something that I really, really wanted to do.”

Sink, who’s also become a high fashion front-row regular at top shows like Chanel and Kate Spade, is preparing herself for the fifth and final season of Stranger Things, set to begin production next year. She’s also wrapped the upcoming Jordan Scott film Berlin Nobody, an adaptation of the 2015 novel Tokyo by Nicholas Hogg.

She hopes to continue to work with directors who can help grow her craft, saying The Whale has influenced how she’ll map out her film future.

“After working on this movie and it being as fulfilling as it was, it really taught me the importance of just choosing the right projects but really choosing the right filmmakers and the right actors to work with and how big of a role that plays in your overall experience.”

Sink will also keep her eye on next year’s Grammys, as Taylor Swift’s All Too Well (10 Minute Version) earned a nod for song of the year and its short film, starring Sink and Dylan O’Brien, is up for best music video. Sink, who’s become friends with the megastar, said Swift has given her advice about navigating fame as a young star – something she knows all too well.

“It comes in a very intense form for her … it’s nice to have someone who can kind of relate to you on that kind of stuff,” said Sink. “It’s a very unique kind of coming-of-age process to be… in the public eye. And growing up, it’s not normal, but something that I wouldn’t trade for anything.”