THE NEW YORK TIMES/ CNA – We can thank early human evolution that many of us can enjoy running as much as we do.

Watch anyone with a ponytail run, and you can see their hair repeatedly describe a figure-eight in the air, responding to the forces generated by the running.

But their heads stay still, their eyes and gaze level.

If it weren’t for some unique evolutionary advances, our heads would do the same as that ponytail, flopping like a swim noodle when we run, according to a clever new study of how – and why – our upper bodies seem to work the way they do when we run, but not when we walk.

The study, which involved treadmills, motion capture, hand weights and an eon’s worth of backstory, finds that an unusual coordination between certain muscles in runners’ shoulders and arms helps to keep heads stable and runners upright.

The new findings may answer lingering questions about the role of our upper bodies in running and why we, unthinkingly, bend and swing our arms with each stride. 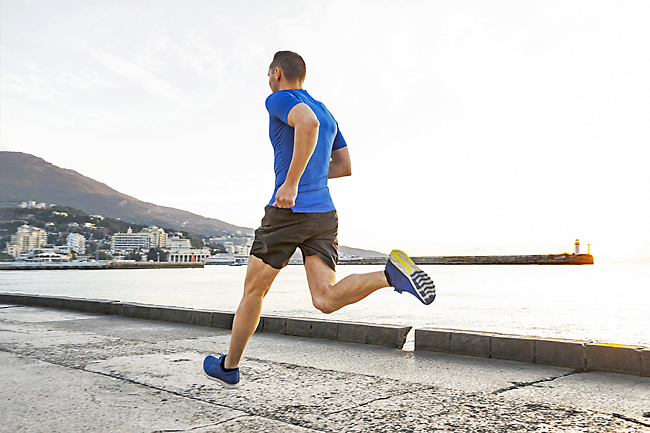 They also add to the mounting evidence that, long ago, distance running began shaping human bodies and lives in ways that still reverberate today. The possibility that we humans are born to run has inspired many studies, books, lectures and debates in recent years, including the journalist Christopher McDougall’s 2009 best seller, Born to Run. The idea is based on fossil research indicating that early humans evolved to have distinctive leg bones and other characteristics that would have aided distance running.

The findings suggest that those of our ancestors who could run well dominated in the procuring-food and procreating sweepstakes, so that natural selection started favouring physical characteristics associated with running.

Much of this research came from the mind and laboratory of Daniel Lieberman, a professor of human evolutionary anatomy at Harvard University and author of the new book Exercised, which delves into exercise and evolution. At first, most of his and other scientists’ work related to evolution and running centred on lower bodies, since legs play such an obvious part in how we get from one place to another.

But Dr Lieberman also was interested in runners’ upper bodies and, especially, their heads. As a longtime marathon runner himself, he knew that a stable head is critical for successful running, but not necessarily a simple thing to achieve.

Running is propulsive. You push off, rise and then brake forcefully against the ground with every stride, placing forces on your head that could make it flop uncontrollably, like that bobbing ponytail. How we manage to keep our heads stable, however, has not been altogether clear.

Like most cursorial species, or animals that run, including dogs and horses, we have a well-developed nuchal ligament, a tissue that connects the skull and neck. That is not the case in species that aren’t natural runners, like apes.

When he was a young scientist, Dr Lieberman recalled, he enticed an animal – who are inelegant runners – onto treadmills to study their biomechanics. Their heads jiggled like bobbleheads when they were forced to run, prompting Dr Lieberman and his colleagues to conclude they lacked a nuchal ligament, a finding borne out by anatomical studies.

But we humans also have the challenge of being upright, on two legs. Presumably to balance ourselves while running, we began, at some point, to swing our arms. Dr Lieberman guessed that the arm swing helped to stabilise our heads. But, if so, there would have to be coordination between the muscles in our forearms and shoulders, he thought, even though these muscles do not physically connect. They would need to fire together and with comparable force during running, if they were to be successful in stabilising our heads.

He was uncertain about how to test that theory, though, until his colleague Andrew Yegian, a college fellow in the department of human evolutionary biology at Harvard, suggested weighting runners’ arms and heads. Add mass there, he said, watch how the muscles respond, and you would be able to tell if the arms and shoulders were working together to steady the head or not.

So, for the new study, which was published last month in the American Journal of Physical Anthropology, Dr Lieberman, Dr Yegian and their colleagues fitted 13 men and women with sensors on their upper bodies that track muscle activity and asked them to, first, walk and then run on a treadmill while the researchers filmed them with motion-capture technology.

Then the scientists handed the volunteers light hand weights and asked them to run again.

Finally, they strapped weighted masks to the volunteers’ faces and had them run once more, before comparing how everyone’s muscles had responded to each of these interventions.

It turned out that not much of interest happened while the study volunteers walked; the muscles in their forearms and shoulders showed no evidence of coordinated activity. But those same muscles snapped into synchronised action when the volunteers started to run; the muscles began firing at the same time and with about the same amount of force.

That synchrony grew during the weighted runs. When the volunteers carried weights and their forearm muscles fired with extra force to compensate, the muscles in their shoulders did the same. Similarly, when their weighted faces prompted the runners’ shoulder muscles to fire more forcefully, their arm muscles did likewise.

The study does not explain how these widely separate muscles communicate with one another, though. Nor can the findings pinpoint when, in our existence as a species, they may have started to work together in this way. It also does not prove that all of us are natural born runners; plenty of people do not enjoy the sport.

Still, the results do tell us more than we knew before about our bodies, Dr Lieberman says, and underscore that running molded us as a species. “If we didn’t have to run” in our early days as humans, he said, “we wouldn’t have this system” of muscular interplay today.