WASHINGTON (AFP) – Rory McIlroy held on for a one-stroke victory in the US PGA Tour CJ Cup on Sunday to return to the top of the world rankings for the ninth time in his career.
Three late birdies proved crucial when the Northern Ireland star bogeyed the last two holes but still edged American Kurt Kitayama.

The four-time major winner is back atop the rankings for the first time since July 2020 – when he was supplanted by Spain’s Jon Rahm.

He ousted American Scottie Scheffler, who finished tied for 45th on Sunday to see his 30-week stint at the summit end.

“It means a lot,” McIlroy said, with a little catch in his throat.

“You know, this tournament last year was the start of me trying to build myself back up to this point. I had a really rough Ryder Cup. I’ve talked about that at length.

“I think I was outside the top-10 in the world. It’s not a position that I’m used to being in.

“I just think about everyone that has made a difference in my life, obviously, not over the last 12 months, but ever.” 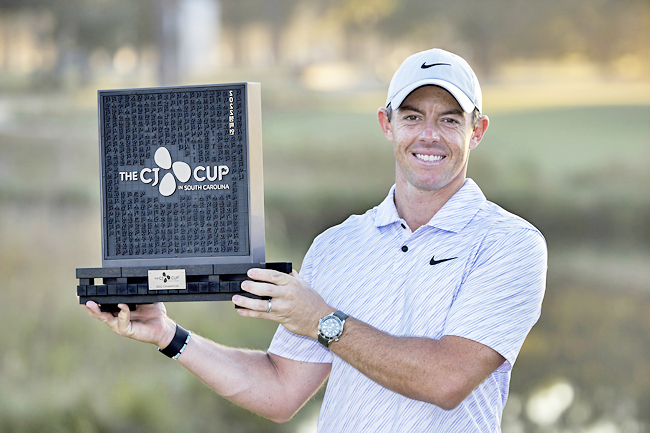 McIlroy defended the CJ Cup title he claimed last year in Las Vegas. The tournament has been moved from South Korea for three straight years because of travel restrictions related to the coronavirus pandemic.

He notched a 23rd career PGA Tour title, and continued to show the strong form of his 2021-22 campaign, in which he won a record third FedEx Cup playoff crown and finished in the top eight at all four majors.

But McIlroy acknowledged it hadn’t been a steady climb over the past 12 months, during which he has also emerged as a strong voice supporting the US PGA Tour amid the emergence of the rival LIV Golf Series.

He said if someone had told him when he missed the cut at the Texas Open in March he’d be No 1 in October, “I would not have believed them.”

“It has just been a wild six months,” McIlroy said. “Now it’s all about going forward and trying to just keep this going.

“It’s a lot to process right now just with everything, but just really proud of myself with how I handled this week knowing what was at stake.”

All found birdies in the early going, McIlroy picking up strokes at the par-five second, the fourth and the sixth before a three-putt bogey at the eighth.

He and Kitayama, seeking a first US PGA Tour title, were tied at 16-under after birdies at the par-five 12th.

The tide turned, however, when McIlroy rolled in a 13-foot birdie putt at the par-three 14th to ignite a run of three straight birdies.